When it comes to play sets, it seems that Playmobil and Calico Critters are at the top every kid's wish list! At least, that was the case when TDmonthly Magazine interviewed specialty toy store owners about their best-selling play sets. Check out the sets below so you can decide which to add to your shelves this year.

Help Santa assemble all the Christmas gifts as he makes his list and checks it twice! The Advent Calendar “Santa’s Workshop” contains twenty-four surprise items for each day of Advent to form a gift that will keep on giving long after the holidays have passed. Set includes Santa figure, two elves and one angel figure, reindeer with sleigh, gifts, assorted toys, wheelbarrow, basket, and additional accessories to build a complete Santa’s Workshop. Once all the pieces are revealed, experience even more fun with the bonus PLAYMOBIL memory game.
— In a December 2014 survey, two out of nine retailers told TDmonthly that this was a best-selling play set at their store. 5/6/2014 (MSRP: $28.99)

The lights turn on and off in this spacious four-room townhome, and the room divider can be moved to create a fifth room. The home opens and closes for lots of decorating and pretend play fun. The moveable staircase and extra floor area can be used to create larger rooms. House measures 12"" x 12"" x 12"" closed, 21"" x 21"" x12"" opened. The Hazelnut Chipmunk Family lives in this home. Critters & some accessories sold separately.
— In a December 2014 survey, two out of nine retailers told TDmonthly that this was a best-selling play set at their store. 12/30/2014 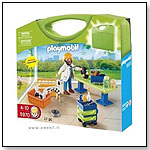 Kids will have fun even when they're on the go with the Carrying Case Vet Clinic. This easy to take-along case comes with a figure, kitten, puppy, guinea pigs, and accessories to help the vet treat the animals.
— In a July 2013 survey Donna Frederick, owner of The Play House Toy Store in Durham, N.C., told TDmonthly that toys by Playmbil are one of her store's overall best-sellers.
— In a May 2014 survey Suzi McMullen, manager of Doodlehopper 4 Kids in Falls Church, Va., told TDmonthly that Playmobil was her store's best-selling play set. 10/24/2012 (MSRP: $12.99; Age: 4 to 10) 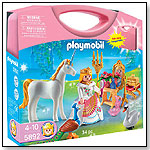 Kids will have fun when they are on the go with the Princess Carrying Case. This easy to take-along playset comes with a figure, unicorn, peacock, swan, vanity, and other accessories.
— Peg Scholtes, owner of Capitol Kids LTD in Madison, Wis., told TDmonthly in a December 2014 interview that Playmobil take-along sets, particularly princess and pirate, are some of their best-selling play sets. 10/24/2012 (MSRP: $10.99; Age: 4 to 8)

Father, Richie is a huge sports fan and works as a sports writer for the Cloverleaf Corners newspaper. Sister, Isabella is the most popular girl in school. She is a member of several clubs including gymnastics and tennis. Baby girl, Katie loves to take a lot of naps and listen to lullabies.
— Barbara Fineblum, owner of Barstons Childs Play in Rockville, Md., told TDmonthly in a December 2014 interview that the Calico Critters Hopper Kangaroo Family was a best-selling play set at their store. 12/30/2014

This rural railway set has the classic Brio quality and features a barn with loading crane, farm engine with wagon, farm tractor with trailer, farm animals and hay bale.
— In a February 2014 survey, two out of 10 retailers told TDmonthly that Brio Trains were among their best-selling wooden toys.
— Patti Tepper-Rasmussen, owner of Learning Tree Toys, Games & Books, Inc. in Oklahoma City, Ok., told TDmonthly in an August 2014 survey that Brio was one of the store's best-selling brand of collectibles.
— In a February 2015 survey, Sue Hottel, co-owner of No Kidding (aka Sand Castle Toys Inc) in Mattapoisett, Mass., told TDmonthly that Brio trains are her some of her store's best-selling wooden toys. 4/29/2013 (MSRP: $59.99; Age: 3 and Up)

This doll house folds up neatly into a carrying case, allowing your child to play with her new best friends anywhere. The house is fully stocked with accessories, such as chairs, toys, beds, tables and even pets. The dolls included are durable, cheerful and fully poseable.
— Syd Clarke, owner of Ali-Cat in Carrboro, N.C., told TDmonthly in a December 2014 interview that the Take-Along Doll House by Playmobil is one of their best-selling play sets. 9/23/2005 (MSRP: $29.99; Age: 3 to 5)

This cozy cottage comes fully assembled and ready to play with everything you need for hours of pretend play fun with Calico Critters. This play set comes equipped with over 10 furniture pieces & accessories including: Bell Hopscotch Rabbit, bed with matching sheets, round table with chairs, kitchen counter with sink & oven, movable ladder for easy access to each floor, cookware and food. Launch date: 2010.
— "We also see a lot of interest in the Calico Critter playhouses - there is quite a variety of them," Suzi McMullen, manager of e-commerce at Doodlehopper 4 Kids in Springfield, Va., told TDmonthly in a June 2013 survey.
— Syd Clarke, owner of Ali-Cat in Carrboro, N.C., told TDmonthly in a December 2014 interview that the Calico Critters Cozy Cottage is one of their best-selling play sets. 3/24/2010 (MSRP: $49.99; Age: 3 and Up) 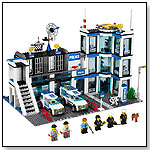 Stop the prisoners from escaping the police station through the pipe drain. They won't get far on foot. Use the police car to chase them down and transport them back to prison in the police van. Help keep LEGO City safe with this feature-packed set. The LEGO City Police Station (7498) features: Set Contains 783 Pieces; Includes 4 police officers, 2 robbers, a police dog and lots of accessories; Modular building make building easy; Includes police car, prisoner transport van, and bicycle; Station features 2 jail cells, command center with computers, helicopter landing pad on the roof, garage for two vehicles.
— As of 11/07/2011 this product had 4.5 out of 5 stars from 11 reviews on ToysRUs.com. Pros: Lots of accessories; fun to build; very detailed. Cons: Expensive; took one reviewer two days to assemble completely.
— As of 11/07/2011 this product had 4.5 out of 5 stars from 15 reviews on Amazon.com.
— Paul Sahagian, owner of Learning Express in Needham, Mass., told TDmonthly in a December 2014 interview that this Frozen Coloring book is one of the best-selling books at their store. 11/7/2011 (MSRP: $99.99; Age: 5 to 7)