Traditional licensed toys may not sell well in a specialty stores, but when retailers find products that are relevant to the rest of their store and just happen to be licensed, they can be quite successful. From construction sets to sticker puzzles, check out the Top-10 licensed toys according to retailers interviewed by TDmonthly.

LEGO Minecraft The Village by LEGO

Every Minecraft world has a village hidden somewhere. Create and customize your own, all with LEGO bricks. In this LEGO micro-world you can build your houses and grow the crops, but watch out for the aggressive Zombies that menace the Villagers. Below the village is a mine, so beware of the TNT when you go wandering, as the walls can explode. Comes with 3 buildable Micromob figures: the Pig, the Villager and the Zombie.
— Three out of 11 retailers told TDmonthly in a May 2015 survey that LEGO was their best-selling brand of licensed toys. 11/14/2014 (MSRP: $34.99)

Ariel’s Amazing Treasures from LEGO® brand Disney Princess™ includes a beautiful coral reef, golden gates, treasure chest, pearl and more!
— Three out of 11 retailers told TDmonthly in a May 2015 survey that LEGO was their best-selling brand of licensed toys. 7/31/2014 (MSRP: $12.99; Age: 5 and Up)

This collector's item is an exact replica of the Gallifreyan multipurpose tool used by The Doctor himself. He's had many sonic screwdrivers throughout his life and they've all been a little different. This particular model is a bit larger than the old one and has a bright green light. Our replica has spring loaded extending action and two ways to make timey-wimey noises. While the screwdriver is closed, just press the button on the side to activate the LED and sound effects. Flip open the cap on the end to reveal an additional button that will activate the light and sound effects when the screwdriver is extended and open. We're not sure if you'll be able to save the world, but at least you'll look hip trying.
— David Stelzer, owner of Shananigans in Baltimore, Md., told TDmonthly in a May 2015 survey that this was one of their best-selling licensed toys. 9/1/2011 (MSRP: $24.99; Age: 5 and Up)

Three fun time activities in one! Use the Special Pen and a rainbow of colors will instantly appear. With the same Special Pen, fill in the dotted area and invisible images and words will become visible. Then unscramble the stickers to create surprise pictures of everyone's favorite Frozen characters. Place the numbered stickers on a numbered grid to complete the pictures. MADE IN THE USA

— Three out of 11 retailers told TDmonthly in a May 2015 survey that Frozen was their best-selling licensed toy property. Bebe Feimster, manager of Big Smile Toys/Hardware Center in Paoli, Pa., told us that this specific toy was their best seller. 4/3/2015 (Age: 3 and Up) 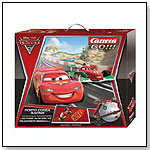 The Go Series and Disney Cars 2 - the perfect combination. The Go Series is a world class starter system for kids 8 and up. All sets include "Turbo Speed" controllers for added racing boost. There is an extensive variety of accessories for thrilling action. The track system has an "Easy to Assemble" bolt system. The street curves have red and white printed shoulders. All cars are fitted with double contact brushes. The cars are high-quality original detailed and tampo printed. They are 1:43 scale. This new Cars set includes the favorite Lightening McQueen, as well as newcomer Francesco Bernoulli. The Go Series and Disney Cars 2 - the perfect combination. Track in Porto Corso style with decorative elements. Includes 1 Lightning McQueen car, 1 Francesco Bernoulli car, transformer, connection section, 2 speed-controllers, 17.71' of track and lap-counter. The ultimate in racing in scale 1:43. Layout size 5.71' x 4.85'.
— As of 12/11/2012 this product had 3.3 out of 5 stars from 19 reviews on Amazon.com. Pros: Easy set up; fun for fans of Cars. Cons: Cars slow down over time; The brushes on the bottom of the cars need to be readjusted frequently; Pressing the speed button causes the cars to fly off the track.
— Mark Rosenblum, owner of Hobbytown in Fairfield, Conn., told TDmonthly in a May 2013 survey that Pixar's Cars was the store's hottest license. 12/11/2012 (Age: 6 to 12)

RAGGEDY ANN and RAGGEDY ANDY have been part of our play culture for decades. Aurora is thrilled to work with Hasbro to bring a new generation of children into the fold of this classic and beloved brand with a new line consisting of plush dolls striking the right balance of vintage and modern elements. In addition to the classic rag doll and Fancy Pals(tm) styles, Aurora has released holiday, Valentine's Day and Spring themed versions that make great gifts any time of year. Each is handmade and features exquisite detail including fine facial features and yarn hair with the classic loop style. These are heirloom treasures that can be passed on for generations.
— Teresa Derry, owner of Annie's Toy Chest in Cocoa, Fla., told TDmonthly in a May 2015 survey that this was their best-selling licensed toy. 1/14/2013

Minecraft Paper Craft- Minecart Set. Available 10/21/13.
— Casey Sartain, co-owner of Tutoring Toy in Salt Lake City, Utah, told TDmonthly in a May 2015 survey that this was their best-selling brand of licensed toys. 11/6/2013