By Justina Huddleston
February 2016
Why do kids and parents love arts & crafts? They stimulate the brain, allow kids to express themselves, and help kids hone their motor skills. It's no wonder, then, that these arts & crafts toys are best-sellers.

Loopdedoo is a new spinning tool that makes fabulous twisted bracelets in just a few minutes. It's fast, easy and fun. Just wrap the threads around the Loopdedoo device, turn the knob, guide the thread and minutes later the bracelet is done. Kids can even make necklaces, anklets, belts and more. There's no pattern to follow so each accessory is completely different and unique. Kids can use as many threads and color combinations as they like, and can make them thick, thin or anywhere in between. Launch date: November 2011.
— In a January 2012 survey, Barbara Finblum, owner of Barston's Child's Play in Baltimore, Md., told TDmonthly that Loopdedoo is their best selling arts and crafts toy. "They came in in December and we sold 194 out of 5 stores - 163 out of 3 stores alone. We sold out and couldn't get them back," she said.
— As of 10/5/2012 this product had 4.5 out of 5 stars from 8 reviews on Amazon.com. Pros: Easy to use; promotes creativity; fun. Cons: One user couldn't figure out how to start.
— In a Fall 2012 survey, Dean Smith, owner of Jazams in Princeton, N.J., told TDmonthly that they sell 15 of this item each month, making it one of their top-2 sellers in the Hobby category. 12/15/2011 (MSRP: $34.99; Age: 8 and Up)

Tooby Loops™ Fashion & Fun allows kids to turn colorful mesh tubing into creative crafts. Use the kit to create headbands, bracelets and more with Tooby Loops, chenille stems, beads, rhinestones and more – all included.
— Barb Stine, owner of Toys on the Square in Hummelstown, Pa., told TDmonthly in a January 2014 survey that Tooby Loops were a best-selling arts & crafts item.
— Joe Berardoni Jr., owner of Pun's Toys in Bryn Mawr, Pa., told TDmonthly in a May 2014 survey that Creativity for Kids is one of his store's top activity toy brands 12/20/2012 (MSRP: $20.00; Age: 5 and Up)

Fashion Headbands by CREATIVITY FOR KIDS 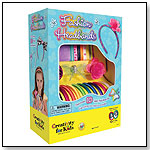 Hidden Pictures makes art appear before your eyes. This Sticky Mosaics kit is full of surprises. Follow a numbered legend and add tiles to 4 fun projects. Complete your picture to reveal one of 4 Wild Animals.
— In a May 2014 survey Sherri Stone, manager of Toys & Co. in Charlotte, N.C., told TDmonthly that The Orb Factory is their best-selling brand of activity kits. "Over a weekend, we could sell 30 pieces of Orb," she said - and 200/month of the whole line.
— In a January 2015 survey, two out of 10 retailers told TDmonthly that Sticky Mosaics was their best-selling arts & crafts line. 11/27/2013 (MSRP: $16.99; Age: 5 and Up) 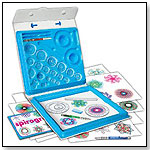 Since it was first introduced in 1965, Spirograph has made it possible for aspiring artists of all ages to create beautifully intricate designs, originally developed as a drafting tool, by a mechanical engineer named Denys Fisher, the distinctive wheels and rings of the Spirograph cleverly combine, the principles of art and mathematics in a way that has inspired and delighted generations. Now you too can create your own cool designs and awesome pictures with the help of this fun and classic Spirograph drawing accessory. Put your paper in place and then choose again and again from 19 different gears to mix and match patterns and create a totally awesome image. Use the design guide to try out tried and true designs or get creative and create cool and colorful graphics of your own. Drawing accessory includes tray with built-in storage and includes 19 gears, 2 rings, 1 rack, 3-Ounce of Spiro-Putty, 3 retractable ball point pens, a 14 page guide book, 20 sheets of design paper and a carry along storage case with a built in work surface.
— Barbara Fineblum, owner of Barston's Childs Play in Arlington, Va., told TDmonthly in a January 2014 survey that the Spirograph was a best-selling arts & crafts toy.
— Dean Smith, owner of JaZams in Princeton, N.J., told TDmonthly in a January 2015 survey that the Spirograph is one of their best-selling arts & crafts toys - they sell around 20 each month. 1/11/2013 (MSRP: $24.99; Age: 8 to 15)

Make colorful, chunky jewelry with Bling Blocks! Create looks that are uniquely your own by stringing Bling Blocks into necklaces and bracelets. Add sparkly touches to your designs! You can make a ring and earrings, too. Includes blocks, silver-colored beads, 1 block ring, sticky gems, satin cord, elastic string, earring hooks, jump rings, beading needle and easy to follow instructions.
— Joe Berardoni Jr., owner of Pun's Toys in Bryn Mawr, Pa., told TDmonthly in a May 2014 survey that ALEX-PANLINE is one of his store's top activity toy brands.
— Matt Peel, manager of Toys & Co. in Greensboro, N.C., told TDmonthly in a January 2015 survey that Alex Toys was their best-selling brand of arts & crafts toys. 9/26/2013 (MSRP: $18.95; Age: 8 and Up)

This hardwood 48-inch easel is height adjustable for growing kids and also collapses for storage. One side is for chalks, and the other side is for paints. It comes with 4 paint or water cups, 6-3/4oz. paint jars, 6 brushes and 2 easel clips.
— When Grafton Stine, owner of Toys on the Square in Hummelstown, Pa., was asked about his best-selling painting toy, he quickly replied, "That would have to be the Easel by Alex."
— "We also have a lot of Alex things. They’re good sellers, especially at Christmas," was the assessment of the brand given by Linda Laramy, owner of Crackerjacks Inc. in Easton, Md.
— "We have paint sets by Alex. We sell a lot of things by Alex," was the brand endorsement provided by Helen Noland, owner of Father Goose in Macon, Ga. 8/21/2006 (MSRP: $80.00; Age: 3 and Up) 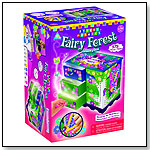 This set comes with four bottles of poster paint and four spill-proof paint cups. Also included are an easel paper roll, chalk, paint brushes, a dry-erase marker and an eraser.
— In a November 2011 survey, 2 out of 12 retailers said art supplies from Melissa & Doug were their best selling educational products.
— Mark Rosenblum from Hobbytown in Fairfield, Conn., told TDmonthly in a January 2015 survey that Melissa & Doug was one of their best-selling brands of arts & crafts toys. 7/27/2010 (MSRP: $34.99; Age: 3 and Up)