When man invented the wheel, little did he think about the world of fun that would follow. And follow it has – where the wheel hits the ground, action and tricks start with today’s extreme ride-ons, not just in sports, but also in toys.

John Reilly, director of sale promotion and public relations for KB Toys in Pittsfield Mass., says that the interest in extreme sports “continues to grow because of the media coverage of high profile events like the X-Games.”

The excitement of stunts on skateboards, barreling along on BMX bikes, and more has inspired a proliferation of wheeled toys that begin with switchboards, small scooters, and pedal cars for the very young, and became larger and more elaborate for older kids.

In a time when kids are busier than ever before with school and activities, teens, tweens, and college-aged guys and gals are attracted to skateboards, BMX bikes, and scooters; “They are not traditional mainstream sports and they can pursue them as individuals at their own pace,” Reilly says.

The popularity of the Razor Push Scooter and its look-alikes is giving way to a new generation of scooters — ones with motors. According to Frank Minero, CEO of Urbanscooters.com, headquartered in Pasadena, California, it’s the logical next step. “Both electric and gas scooters are in high demand with teens and college-age kids,” he says. “The technology is there, the cost has come down, the interest is high and steadily growing.” 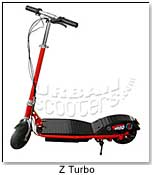 The Z Turbo from Z Scooter combines light weight and portability – the handlebars can be folded – in a classic design, and the Bladez XTR Lite 250 Electric Powerboard Scooter also folds easily and offers a quick and quiet way to get around. And from the company with the original Razor scooter, Katherine Mahoney, vice president of marketing for Razor USA LLC (ToyDirectory), says that the E200 and larger sibling E300 are her company’s big sellers in the electric scooter market. 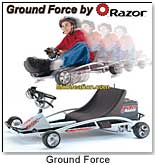 A long way from the cartoon image of plywood, cardboard, and wire go-karts, the Razor Ground Force™, introduced this year, breaks new ground in its sleek revamping of a classic concept, ready to give thrills for riders in controlled riding environments. 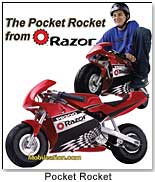 Razor’s other new innovation, the Pocket Rocket™, is sure to attract young lovers of real racing pocket motorcycles in this miniature electric version. With its race-inspired fairing design and double crown fork, the bike will do its part for Razor’s projected sales of electric items – half of their total sales for 2004.

The Bladez Corp., located in Foothill Ranch, Calif., which also offers gas-powered scooters such as the Bladez Moby X-25 Gas Powerboard Scooter, makes the Bladez XTR Lite 250 Electric Powerboard Scooter. Also portable and easy to carry, the scooter has a special power feature that manages the battery and motor and automatically shuts off when not in use.

The Bladez spin on the go-kart, for older teens, comes in the form of the G300 and G400 Powerkarts, with T-handle steering, disc brakes, and speeds of up to 20 mph.

The familiar extreme ride-ons of skateboards and BMX bikes have ongoing appeal. Sport Fun, which according to the Toy Industry Association holds the record for the longest continuous manufacturing of skateboards, innovates with such movie-related designs as the “Spider Sense” or the “Web Slinger.” The Tony Hawk designs from Birdhouse skateboards, including the best-selling Falcon 3 and Killing Birds, one of a series inspired by old horror movies, come from the company of the man who has arguably done the most for skateboarding. On the BMX front, Mongoose celebrates 30 years this year, and its bikes such as the Mission and Mischief showcase freestyle frame and knee-saver handlebars.

The question is not if extreme ride-ons are here to stay; it’s just what innovation will appear next.