Travel Games for the Experienced Traveler

Spin…Switch…Spell…and Score. Word Spin is the original award-winning magnetic spin game that combines the best elements of many popular word games and crossword puzzles. It’s simple enough for children to play, yet challenging enough for college professors. The travel-sized, one-and-a-half inch diameter of Travel Word Spin makes this version of the game ideal for car trips, airplane or train rides. Keeping all the pieces together won’t be a problem since the compact package comes with a specially made travel pouch. 4/18/2005

1980, the year Olympic skater Michelle Kwan and pop-singer Christina Aguilera were born, President Ronald Reagan was in the White House and millions of Americans were tuning into the TV show Dallas, was also “the year of the Cube!” Now a pop-culture icon, the first Rubik’s Cube made its debut at the American International Toy Fair in New York in 1980, and within just two years, 100 million “Cubes” were in households from Peoria, Ill. to Paris. The cube has 43,252,003,274,489,856,000 combinations and can be solved by true aficionados in as few as 16 seconds. It’s a great time to pick up the Cube again. The 25th Anniversary Edition Rubik’s Cube comes in a collectable silver packaging and with a free Rubik’s Cube stand. 12/27/2004 (MSRP: $10.95; Age: 8 and Up)

Imagine the intriguing and hugely popular Chinese tile game, Mah Jongg, meeting one of America’s long-time favorites, Gin Rummy, and you get the fresh, fascinating and fast-paced Forbidden. Forbidden is designed in beautiful Chinese zodiac imagery, with Royal cards featuring the Dragon, Monkey and Emperor, which will give players special powers and bonus points. The goal of the game is to accumulate 200 points over several rounds of play, as players form sets and runs and strive to be the first to “Cheng” (go out). But be careful, don’t get caught with Forbidden cards as they can be the most dangerous ones. 4/18/2005 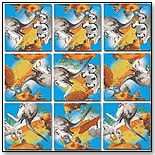 “Are we there yet?” is the dreaded question often repeated by children when en route to a destination. When traveling, it’s important to be comfortable, to take breaks, to refuel the body (and the car, of course), and to keep occupied. One of the best options is Scramble Squares, 9-piece brain teaser puzzles, which were recently honored by The Institute for Childhood Resources in San Francisco as “Dr. Toy’s Smart Play/Smart Toys, the Best Smart Products for Baby to Older Children for 2005.” Scramble Squares received more of the awards than any other of the one hundred six products named to the “Dr. Toy´s Smart Play/Smart Toys” list for this year. The 10 Scramble Squares puzzles receiving this prestigious award are Boston, Bunnies, Civil War, Hot Air Balloons, Ice Cream You Scream, Penguins, Retrievers, Sea Shells, Serengeti and Space Shuttle. 4/18/2005 (MSRP: $8.95)

LETTERFLIP™ by OUT OF THE BOX PUBLISHING

These 96 brilliantly colored, flexible magnetic tiles come with a sturdy 8" by 8" black textured steel activity board, color-illustrated instructional material, and a double-record album-style package to store the board and tiles. The diamond-shaped tiles are used to create everything from snowflakes and starbursts to a bouquet of flowers and swarm of fireflies. The game has won a Parents´ Choice Award for play and educational value, quality and design. It is made in the USA.
— Patti Tepper-Rasmussen, owner of Learning Tree Toys, Games & Books, Inc. in Oklahoma City, Okla., told TDmonthly in an April 2013 survey that Fractiles are one of the store's best-selling travel products. 9/1/2004 (MSRP: $29.95; Age: 6 and Up)

Shout About Movies by PARKER BROTHERS 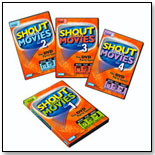 Shout About Movies introduces the concept of the Game Video Disc, which offers instant, explosive fun, without the need for dice, pawns or a game board; all that is needed to play is a television and a DVD player (making it a great travel game to play aboard cars that offer these features). This GVD challenges players’ film knowledge through video and audio clips from more than 60 years of the most unforgettable and award-winning movies. The game invites 4 to 40 players to compete in teams in a race to identify famous quotes, scenes and characters from major motion pictures. The game features “Shout Rounds,” where players yell out answers and “Whisper Rounds,” where teams huddle secretly to discuss strategies before giving an answer. Scoring is calculated on screen using the remote control from a DVD player.  4/28/2005