Here he shares some of his best-selling toys:

The Blast Pad Advanced Missile Launch System comes with telescoping technology that expands to almost 3'. The carrying case holds up to six soft-tipped missiles and the Flex Launch tube can’t kink to restrict airflow. Mark Rappaport, founder of Marky Sparky, invented his first toy when he was 9, according to his website. The Blast Pad was the winner of the 2003 Creative Child Magazine Preferred Choice Award.
— “We sold more than 500 during Christmas [2005] alone,” said Lee Ann Stern, general manager for the 11-year-old Village Toy Shop in Easton, Mass. Amanda Toupes, manager of Magic Box in New Orleans, added, “Some of [the missiles] get 200' in the air.”
— This toy is "sans pareil," according to Michael Ziegenhagen, owner of four Playmatters stores in Cleveland. "It has broad appeal as an outdoor boy toy" and has been one of his best sellers for four years.
— “These have sold well for us from day one,” Co-owner Jude Larene of Izilla Toys in Seattle told TDmonthly in mid-2007. “It's a kid magnet at the park.” 9/1/2004 (MSRP: $23.95)

PlayFoam provides hours of creative fun with its lightweight, colorful foam-sculpting material that won't crumble, stick to skin or surfaces or dry out. According to an Educational Insights press release, PlayFoam was being “pre-ordered by the hundreds” at Toy Fair 2006.
— Sally Lesser, owner of Henry Bear’s Park in Massachusetts, told TDmonthly in spring 2007 that PlayFoam is a product her stores try to keep “in stock all the time, as I’m sure anyone would.” In fall 2007, Owner Idanna Smith of Juggles in Wakefield, R.I., named it as a best seller.
— Jim Whitney, president of Educational Insights, shared this insight with TDmonthly: "From the moment you touch PlayFoam it intrigues and fascinates ... It combines all the fun of sculpting with the soft, dry, squishy tactile feeling of a stress ball. It ... will last for years and is addictively fun."
— PlayFoam, a winner of a TDmonthly Top Toy 2007 award, is one of those creative alternatives to clay that many specialty retailers have made a staple in their stores. The reusable product comprises tiny foam balls that draw textural interest for the sculptor and offer visual appeal in a finished creation. Playfoam easily encourages open-ended play.

This plush toy puts classical music at a baby's fingertips. This huggable, plush activity toy plays beautiful classical music, while sparkling lights flash. It features four musical compositions, activated by a simple touch, and can also be used in a long-play lullaby mode. Fun tactile activities include a crinkle, squeak, beads and teether. It is a versatile crib, floor or take-along toy with high-quality sound. “I really like the Sunshine Symphony by Neurosmith,” Manager Jane Worm of Crackerjacks, Inc. in Easton, Md., told TDmonthly when asked about 2006 holiday best sellers. It's a good value and makes a nice baby gift, seconded Michael Ziegenhagen, owner of Playmatters in Cleveland. 11/21/2005 (Age: All Ages)

Perfectly sized for most fashion dolls, this large dollhouse is filled with wooden furniture, and is brightly finished in trendy colors of hot pink, lime and lavender. The fashion dollhouse set includes a secret attic under the flip-top roof, three floors (excluding attic) including living room, kitchen, den, bedroom and bathroom, and 18 pieces of wooden furniture, some with fabric detail. The house weighs 39 lbs. and measures 32 ½” x 13 ½” x 51” H.
― Kelly Rummelhart of Ruby Q’s in Gridley, Calif., told TDmonthly in spring 2007 that she’s had “great experiences” with KidKraft. 1/9/2007 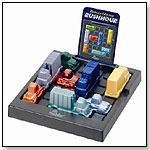 This game'll get kids up and moving. If they can't dodge the disks, they can block them with a built-in shield. Dodge Discs are a set of long-range disc launchers that send foam discs flying up to 25'. Each lightweight hand-held device serves as a disc launcher and doubles as a shield. A top-loading compartment holds 10 soft foam discs that feed into the rapid-fire launcher. Each set comes with 2 launchers and 20 discs that are dispersed with a push of a button. In early 2007, Michael Ziegenhagen, owner of Playmatters in Cleveland, had been selling Dodge Discs for one year. "It's a good action boy toy for indoors and out for under $20," he told TDmonthly. They were chosen as an iParenting Media Award Winner for Excellent Products of 2006. 1/6/2006 (MSRP: $19.99; Age: 6 and Up)

The Star Party headset microphone lets every girl have fun while being the star. This adjustable kid’s headset microphone features an amplifier that clips onto the belt for complete portability, four melodies, eight rhythm styles and an applause button. The other Star Party products are compatible with one another, so a group of friends can sing, record and dance together. When asked for his best sellers, Michael Ziegenhagen, owner of Playmatters in Cleveland, said that this item had done consistently well for three years. "I don't know why!" he told TDmonthly. 8/21/2006 (MSRP: $19.95; Age: 5 and Up)