As the industry welcomes the addition of several new puzzles, just as many pieces — including some that bear the name Sudoku — are becoming misfits in the specialty market, a recent 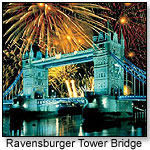 Half of the retailers surveyed cited Ravensburger as a strong seller.

Serendipity Puzzle Co. and Buffalo Games (ToyShow) puzzles are popular at a few shops, but many retailers, including Amy Barrett, owner of Lasso the Moon Wonderful Toys in Helena, Mont., prefer to “ThinkFun.”

“They always come out with new stuff,” Barrett said.

“I sell quite a few wood puzzles to therapists,” noted Cheryl Richmond, owner of Punkin Doodles in Havre, Mont. “They tend to like Melissa & Doug.”

When asked specifically about puzzles for young children, 10 out of 10 retailers also named Melissa & Doug, for its floor puzzles in particular.

“We have some in the back, but they don’t sell well. We haven’t ordered any in the last few years,” said Owner Lois Colgin of The Toy Box in Augusta, Ga.

Chris & Debbie Thompson of Shenanigans Toys in Peachtree City, Ga., said they don’t stock 3-D puzzles because “the big toy stores have them.”

Manager Gwen Bowden of Doodlehopper 4 Kids in Springfield, Va., is one of 10 retailers who indicated the Sudoku craze may be slowing, too.

Sudoku is “still selling,” she said, “but not like when it first came out.”

Roger Lee, co-owner of Olney Toys in Olney, Md., agreed that “there’s not as much interest as there was six months ago. I think Sudoku is on its way out the door.”

On the manufacturing end, Founder Daniel Young of Paradoxy Products told TDmonthly that the MOZANIAC Picture Puzzle System is “the most important and revolutionary advance in picture puzzles since the English printer John Spilsbury invented the jigsaw puzzle in the 1760s” because of its modular pieces that slide over and under one another to form four completely different images from the same six flat pieces.

Advancement in puzzles is even coming to the tween market, through GT² Fun & Games, which has combined puzzle construction and strategic game play in its story-driven XIG line.

To see which products retailers and manufacturers say are worth putting the pieces together, read on:

Puzzellations – In the Garden Too Magnet Pack by TESSELLATIONS

This set includes 84 magnetic foam puzzle pieces and combines art and math to stimulate creativity. It features flowers, bumblebees, snails, ladybugs and more, and is simple for young children, but can challenge older kids and adults. It has various solutions and can be used along with the original. A Classroom Pack ($39.95) with 234 non-magnetic pieces is also available. Launch date: January 2006.
— “All of our puzzles contain multiple brain teasers to solve, but the real idea is to explore on your own,” Owner Robert Fathauer of Tessellations told TDmonthly. “The educational content in our puzzles is strong, so they appeal to parents who are looking for toys that will help their children develop math and problem-solving skills. Professionals with a math and science background … find them more interesting than mass market toys.” 3/7/2007 (MSRP: $19.95; Age: 5 and Up)

The award-winning XIG series features unique stand-alone games involving puzzle tiles that connect during play. If desired, the completed puzzles of each game ingeniously combine into an amazing overall XIGsaw puzzle and story in a fascinating world of mysterious creatures. In XIG-The Sorcerers Sword, players challenge each other to complete an amazing sword puzzle while trying to control Sorcerers and rings of the four elements. Control of the rings allows players to protect their own Sorcerers. Spells and curses help players advance or hinder their progress. Launch date: October 2006.
— When creating XIG puzzles, the company’s two primary objectives were to “create a game that hit a chord for the tween market playing with the parents — cool enough, but interesting and engaging enough for adults to be involved” and to develop something innovative and creative — “not just the rehashing of an old idea,” President Greg Scott of GT² Fun & Games told TDmonthly. 2/19/2007 (MSRP: $29.95; Age: 8 and Up)

The MOZANIAC Picture Puzzle System, in its simplest form, makes four consecutive pictures from the same six flat pieces. The system is expandable and will eventually offer more pieces and even more pictures from those pieces. In the Male Artists Puzzle, the six pieces on the left, printed front and back, make the four pictures on the right — Van Gogh, Cezanne, Matisse and Gaugin. Launch date: April 1, 2007.
— “MOZANIAC is a picture puzzle system based on interpenetrating modular pieces. It offers new visual, mental and physical challenges and will grow into a universe of puzzles over the next few hundred years. MOZANIAC requires [players] to both reveal and conceal visual material when they slide the pieces into each other, making it more challenging than a jigsaw puzzle, even with only six pieces,” Founder and Inventor-in-Chief Daniel Young of Paradoxy Products told TDmonthly. “When we begin to produce puzzles with even more pieces, puzzle aficionados will faint with delight.” 2/19/2007 (MSRP: $7.95; Age: 6 and Up) 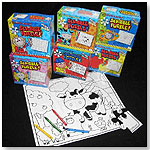 Scribble Puzzles feature 24 big, chunky pieces that kids can put together easily and color with wax-based crayons. The wipe-off surface allows children to decorate again and again. Finished puzzle size is 12-1/2" X 15". Six varieties are available. This product is a 2007 Dr. Toy Best Product Award winner. Launch date: Fall 2007.
— “There doesn't seem to be anything like this on the market. … They are big, chunky pieces that the kids can put together easily, and they can color them. We create products that kids can use over and over again,” Owner Andi Thea of Scribble Mats told TDmonthly. (

Made of 3- to 5-mm durable high-quality wooden board, this vintage car is easy to build or color as a three-dimensional decoration. It appeals to just about any age, from 6 to 60. Cost and service set China Towins apart in the marketplace, according to U.S. Marketing Director Jim Vuong. “We will stock in the United States and sell [at the] China factory price, about 70 percent lower than the current wholesale price, and can accept small-quantity orders.” Launch date: April 2007. (

This original Big Picture Box houses artist Kinuko Craft’s Eleanor of Aquitaine. Exciting new packaging means that by opening the flap the cover image can be showcased in an expanded view and looked at while building the puzzle.
— Breck Hewitt, co-owner of Dragon’s Toy Box in Seattle, said that tween girls in his store pick puzzles over most other toys.
— Tween girls like to be challenged, agreed most retailers.
— Masterpieces Puzzles offers six other designs by Kinuko Craft, Eleanor of Aquitaine’s artist, including four with glitter and glow. 5/9/2006

Rendezvous in the Rainforest by SERENDIPITY PUZZLE COMPANY 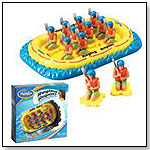 In this game, players help 12 whitewater rafters brave the rapids and make it safely back to their raft. The crew, fit with jigsaw pieces as a base, can face either the bow or stern of the raft, but there is only one correct solution for each direction. Players must help these rafters back in their raft or they will be all washed up. The game includes two puzzles in one and a boatload of fun. 3/7/2007 (MSRP: $10.00; Age: 8 and Up) 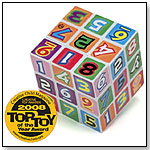 This colorful numbered cube challenges players to play Sudoku on all six sides of the cube as well as with horizontal and vertical lines going around, for a total of 18 puzzles. Also plays as traditional color cube, comes with a 48 page booklet of how to play, how to solve, history of Sudoku and 50 new 2 dimensional puzzles. 2/28/2007

Evening in Frankfurt, Germany by RAVENSBURGER

This 2,000-piece puzzle comes out to a finished size of 29 ½” by 38 ½”.
— Jigsaw puzzles are popular items for adults at Amazing Toys in Great Falls, Mont., according to owner David Campbell.
— “They’re coming out with fantasy-type puzzles now for Baby Boomers,” said Shanna Frieling, owner of Giggles Toys & More in Bozeman, Mont. “Ravensburger has come out with dragons and wizards — stuff like that.”
―“Ravensburger is a great company to deal with,” said Dan Willis, owner of Communique Toys in Seattle, in spring 2007. “They have a ramp-up buy at the beginning of the year. They have the ability to place re-orders for free freight at a lesser volume.” 3/7/2007 (MSRP: $26.99) 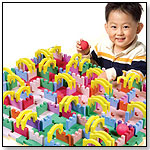 With the Maze Mat Block, children first remove the cross puzzle of the mats and assemble them. They then create a maze by plugging the castle blocks from the inside after building a square wall by inserting blocks into horizontal slots. Once the tunnel blocks are plugged, kids can play the maze game with the ball, creating new mazes by adding or removing blocks. The product helps with intelligence development, IQ improvement and emotional stabilization. 3/6/2007 (Age: 3 and Up) 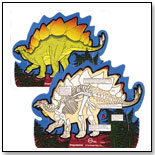 These frame tray die-cut puzzles typically measure 11" x 14" and are made of sturdy 1/4" board. Printed underneath the puzzle on the tray is a colorful cross section that illustrates and explains how things work. Captions are clearly written for first readers. Inside/Outside Puzzles have received awards from the Oppenheim Toy Portfolio, Parents' Choice, Dr. Toy, The National Parenting Center and Teachers' Choice. “Each puzzle … has clearly written captions to explain the sectional view printed on the tray and under the top layer. A 3- to 5-year-old will learn, for instance, that the brain of the Stegosaurus was very small,” Amy Kallman Epstein of The Straight Edge Inc. told TDmonthly.
— Catherine Kleszczewski, president of Music in the Parlour in New York, said she really liked this and other Straight Edge puzzles at Toy Fair. “I know my son would love it,” she said. 2/28/2007 (MSRP: $8.99; Age: 3 to 5)

This puzzle is a fantastic find for fossil fiends. The three-dimensional dino is made from premium-quality birch wood. It's easy to assemble without tools or glue using the unique interlocking pieces. This premium line puzzle measures 23" long by 48" wide when complete. The puzzle kit includes sandpaper, a Pteranodon fact file and puzzle instructions in case you get stuck. 2/26/2007 (MSRP: $29.98; Age: 6 and Up)

Magnetic Travel Tangoes delivers all the fun of traditional Tangrams in a compact form. With magnetic puzzle pieces, an integrated play surface, wire-bound puzzle booklets and a snap closure, it’s great for short trips, long journeys or even staying at home. It is also available in Object and People themes. Launch date: April 2007. 2/23/2007 (MSRP: $9.00; Age: 5 and Up)

Great Big Sneaky Puzzles: A Day at the Zoo by PATCH PRODUCTS INC.

This 46-piece great big puzzle is actually two puzzles in one. One side features a family of tigers, and the other has a zoo scene. In addition to being fun for children as young as 3, the puzzle also has educational value. The letters of the alphabet and the numbers 0 to 9 are hidden in the scenery, which is what makes the puzzle sneaky. Launch date: June 2006. 12/14/2006 (MSRP: $10.00; Age: 3 and Up) 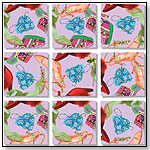