By Dennis Furlan
August 2007
Kids are supposed to eat right, play well and grow up to have healthy bodies and curious minds. Yet, so many of today’s toys are about having fast fingers and eyes rather than quick minds and feet.

According to President Lee Thompson, the company provides more than a health-oriented toy; it’s issuing an entire philosophy embodied in a character named Professor Woodpecker.

The distinction is important to Thompson, who told TDmonthly Magazine he's not just offering up another cute little plush animal — although the Professor does come in a plush version. Rather, Professor Woodpecker exists to teach kids about healthy eating, active play and wholesome values.

"It was important for us to develop something that was more than just a gimmick,” Thompson said. “We wanted to try to instill some core values in today's kids.”

A PARTNERSHIP OF VALUES

Thompson originally collaborated with Stanley Hill, the current vice president of the company, because they shared similar values about today's children.

But it was Thompson himself who created Professor Woodpecker: "I just thought that the woodpecker was a regal-looking bird and could represent the wholesome values that we wanted this venture to be about,” he said.

Both spent countless hours researching ideas they wanted to impart to children.

"The amount of knowledge and money you need for something like this is considerable,” Thompson said.

TOY FAIR AND BEYOND

The first fruit of their labors is the Professor Woodpecker Educational DVD, an interactive learning tool that teaches children about health and nutrition. H & T featured it during Toy Fair 2007, where Hamilton said the response was encouraging.

"So many of the specialty retailers we talked to said that they needed a concept just like this, where healthy values are instilled in today's kids,” Thompson added.

H & T has sold most of the 1,000 DVDs from the company’s first batch, and Thompson and Hill are ready to move forward. They continue to think of ways to promote their line, to get as many people as possible to meet — and learn from — the Professor himself. 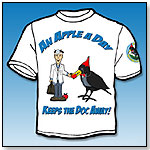 These children’s shirts have positive and educational messages printed on them for learning and sharing on the go. 4/27/2007 (MSRP: $10.00)

Children can enter Professor Woodpecker’s world and learn about nutritional foods and snacks as they explore good eating habits and good health habits in a fun and exciting way. The DVD provides an interactive method of teaching fun basics while maintaining a child’s attention by feeding the imagination with live characters and their animated counterparts. Viewers can watch as Professor Woodpecker and friends meet Jerry the Gorilla, Squirmy the Worm and Billy the Goat on three different adventures. This product received a 2007 Seal of Excellence Award from Creative Child Magazine.
— TDmonthly Roundtable reviewer Mildred Tong said her four children (from ages 2 to 9) "loved the song" on this DVD. "Professor Woodpecker was a neat character," she added. "They liked the costume and his accent." 1/5/2007 (MSRP: $12.95)

Educational Nutritional Books are accompanied by a read-along CD. Three titles are available: "Professor Woodpecker Loves Cereal," "Banana Sandwiches" and "Apples." Each provides a wholesome and fun adventure that teaches about healthy and nutritious foods and snacks. A bonus unique song on each title is included, and kids will be able to sing along and dance. (The set of three is $25.) This product received a 2007 Media of the Year Award from Creative Child Magazine.
— “The book/CD is almost like a kid-friendly cookbook!" said Gail Richardson upon reviewing "Banana Sandwiches" with her children (ages 6 and 8) for a TDmonthly Roundtable. 6/13/2006 (MSRP: $10.00)

Kids can learn in a wholesome fun way about organic, healthy foods and assorted subjects with Professor Woodpecker®, a plush character that is soft, huggable and made with very bright fun colors. 6/13/2006 (MSRP: $15.00)