Wings don’t guarantee that a toy will fly off the shelves, but it’s a good place to start. Of the 17 retailers TDmonthly Magazine surveyed, 10 mentioned strong sales for RC aircraft. Of those 10, 80 percent noted helicopters were among their best sellers. And in the general mix at toy stores, trains and a few other electronic items are keeping registers ringing.

Besides the popularity of radio-controlled aircraft, electric trains remain a hot ticket. “Lionel Trains … take up about half our store,” noted Robin Ellerman, owner of Trains -N- Toys in North Canton, Ohio.

“Imitations abound, but Lionel is the best,” exclaimed Pat Peresich of The Emporium in Biloxi, Miss.

Rokenbok sets are the best-selling electronics at J. Christopher Toys in Jonesboro, Ark. “It requires the kids to have creativity, and they have to build the system to make it work,” Owner Mary Horne told TDmonthly.

Offering a bit of crossover appeal, both Brad Ray, owner of Kid’s Corner in Carmel, Ind., and Charles G. Bonner of Heights Toy Center in Little Rock, Ark., told TDmonthly that they usually don’t sell electronic toys, but the Rubik’s Revolution by Techno Source has been a recent exception.

“People just can’t put this down,” Ray pointed out.

Although “20Q was hot for a while, it’s simmered down” at Miner’s Doll & Toy Store in Ocean Springs, Miss., according to Owner Mary Alice Miner.

WHAT TO MAKE OF IT

According to The NPD Group, sales for youth electronics were up another eight percent in the first half of 2007, after a 22 percent increase in 2006. Combined with 17 percent growth for vehicles in early 2007, the items below may finish out the year just as strong.

In the world of electric radio-controlled helicopters, the Eflite Blade CX 2 radio-controlled heli stands out not just because of its looks, but because it also offers the latest technology available, such as a 2.4 GHz radio, which lets you fly anywhere without channel interference. This helicopter also features an improved gyro and servo control motors. The Blade CX 2 can be flown by almost anyone with some practice and can easily be flown indoors.  It comes with a training gear set and qualifies for free shipping. The Blade CX 2 also comes with an instructional DVD and manual and is backed by solid phone tech support. Parts are widely available. Launch date: 2006. 10/30/2006 (MSRP: $189.99)

Electric radio-controlled helis are the rage right now. With the new Blade CX you get a completely assembled and ready-to-fly, micro-radio control heli with a design that is so stable almost any first-time flyer can be hovering like a pro in no time. This is the most popular micro heli on the market today and can be flown indoors.

Included are a free training gear set and a crash kit comprised of the four most commonly used parts (regularly $33.95). This item also qualifies for free shipping.

The Blade CX comes with an instructional video CD and manual and is backed by solid phone tech support. Unlike toys, parts are widely available. Everything that's needed for flight is included with your purchase. 10/30/2006 (MSRP: $189.99) 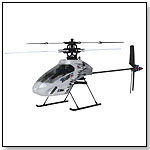 The Rubik's® Cube is an icon recognized around the world, selling over 350 million units. Now there's an all new spin on the world's #1 Cube—the Rubik's Revolution™. Packed with speed games and brainteasers everyone can play, the award-winning Rubik's Revolution is an all new spin on the world's #1 Cube. Six addictive, fast paced electronic games are easy to learn, but will push your skills to the limit with multiple challenging levels to unlock. Fun for ages 5 or 105, play by yourself or compete against your friends in both single and multiplayer games to become master of the Cube. “Rubik’s Revolution was designed as the electronic sequel to one of the best-selling toys in history ... It provides a whole new take on cubing. It is about speed. It is about smarts,” said Eric Levin, executive vice president of Techno Source. “Techno Source is also offering a Professor Rubik’s Signature Edition for the specialty market.” Winner of 10 Awards including the TIA 2008 T.O.T.Y. Game of the Year, Rubik's Revolution won a 2008 iParenting Media Award, a 2007 National Parenting Center Seal of Approval Award, a Dr. Toy Summer 2007 Best Products Award and a 2007 NAPPA Gold Award. Launch date: Summer 2007.
― “I think it will do very well,” Debbie Wurzburger, owner of Toy Chest in Pikesville, Md., told TDmonthly.
— Four out of 58 retailers who spoke with TDmonthly cited Rubik’s Revolution as their most popular “big-kid” item.
— When asked what he would most recommend for older kids and adults, Bill DeFusco, owner of Toyz Toy Store in Chesire, Conn., told TDmonthly, “The first one that comes to my mind [is] Rubik’s Revolution.” (

This aggressive machine is fully functional with deep-tread tires that dig up dirt while riding across the terrain. Move it onto the lake, pond or stream and watch water spit up from the tires while twin propellers spin for extra power. This product is a 2007 Creative Child Preferred Choice Award winner.
— Radio-controlled vehicles were named as a much-wished-for-holiday toy by boys, according to a 2007 Reuters report.
— “This remote-controlled car goes on land and water and is designed for kids ages 5 and up,” said Joe Berardoni, Sr., owner of Pun’s Toy Store in Bryn Mawr, Pa., in the fall of 2008. “It has been popular for several years now.” 7/19/2007 (MSRP: $79.99; Age: 5 and Up)

The sleek silver and green, dual-winged Hyper Flyer is a radio-controlled stunt plane that can perform amazing aerial stunts including loops and barrel rolls. The plane can dive, roll and spin, and take off from the ground. It can perform touch-and-go stunts for fast land-to-air take off. With its state-of-the-art charger, the Hyper Flyer is ready for aerial action in just five minutes. It is constructed from virtually indestructible EPP foam. This product is a 2007 Creative Child Toy of the Year Award winner.
— “All of the new items from Kid Galaxy were great,” Idanna Smith, owner of Juggles in Wakefield, R.I., told TDmonthly about Toy Fair 2007. (

This motorized conveyer carries ROKs to the Action Sorter, where they can be sent in four directions for either reloading or storage. It requires three AA batteries. 11/5/2007 (MSRP: $64.99)

This game is a friendlier version of the classic 20 questions game, created with younger children in mind. The game itself features simplified questions and answers and is built to better fit in small hands. To play, kids simply think of an object and then answer a series of 20 questions about the object. 20Q Junior is programmed to engage in child-friendly banter and enthusiastic encouragement. Kids can use color-illustrated and themed picture cards to help them identify an object.  6/29/2007 (MSRP: $19.99; Age: 5 and Up)