Parents Still Shy Away from China

U.S. and European Toys Fill in Gap Left by Recalls

By A. Antonow
December 2007
Given the millions of “Made in China” toys recalled this year, some parents are opting for products made in Europe and the United States, retailers and manufacturers told TDmonthly Magazine.

In September 2007, Mattel executive vice president for worldwide operations, Thomas A. Debrowski, apologized to Chinese product safety chief Li Changjiang for the Mattel recall, which was caused in part by design flaws, not by Chinese manufacturers. Approximately 17.4 million units of Mattel’s toys were recalled because of design flaws, while only 2.2 million were recalled because Mattel claimed that Chinese firms used lead-based paint in the products. 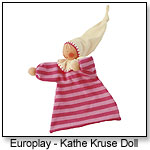 Four out of 45 retailers TDmonthly interviewed this year pointed out that the towel dolls from Europlay are hot sellers. And one mother of TDmonthly’s Preschool Roundtable especially liked Europlay’s Fabulantis game. “The entire game/package was visually attractive,” Heather Jones enthused.

Kristina Shabagyan of Moolka.com, an online retailer of European toys, reported a spike in sales after the Mattel recalls and increased sales throughout the summer of 2007. Shabagyan credits concerned parents with the increased sales.

But products from a European company aren’t necessarily made in Europe. 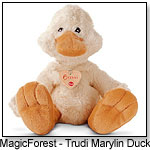 MagicForest Ltd., for example, is the exclusive North American distributor for Trudi and Sevi, which both outsource production. The products are designed in Italy, but many are actually made in China under supervision.

For WOW Toys, “Design and model making takes place in the U.K. but manufacturing takes place in China,” a company representative explained. Some of the toys sold at Moolka.com are assembled in China, although always from materials made in Europe.

And this could pose a problem for retailers, as some parents “are not looking anywhere past whether or not it was made in China,” Sara Frazee of Jewel in the Crown toy store in Grass Valley, Calif., told TDmonthly.

COMPANIES STICK TO THE STATES

While the majority of North American manufacturers take production abroad, some U.S. companies have very strong convictions about keeping manufacturing nearby.

Michael Rainville of Maple Landmark Woodcraft told TDmonthly that “the cost of production in China is easily more than 75 percent less than in the U.S.,” but pointed out that with current customer concerns, “We would not be in business if we went overseas.” Since the recalls, he said, business has been up for his company.

Jonti-Craft, a manufacturer of award-winning children’s furniture, makes its products in Minnesota. Vice President of Marketing Nick Schwarz credits local production with allowing the company to continue crafting high-quality furniture that comes with a lifetime warranty, he said.

WHAT REALLY MAKES IT SAFE?

Although many parents and retailers praise the quality of U.S.- and European-made toys, there are indications that the country of origin may not account for everything.

CSPC spokesman Nychelle Fleming advises parents to keep alert to recalls, she told TDmonthly, and is hesitant to promise that U.S.-made toys are always safer.

Plus, recall scares haven’t necessarily put a dent in overseas production. Chinese-made toys are actually doing better in the months leading up to Christmas, Reuters reported, and toy factories in China’s Guangdong province are allegedly as busy as ever.

While keeping an eye on recalls is useful, reading labels alone doesn’t always guarantee a safer product. Parents concerned about lead paint, though, might take some comfort from CSPC spokesman Nychelle Fleming. Fleming points out that choking hazards are still the most prevalent threat among children’s toys, and that is certainly something parents can be aware of, simply by avoiding toys with small parts that can easily break off and be swallowed.

See some products from the companies mentioned below. And learn more about where products are made and how they're tested by ordering the 2007 TDmonthly Specialty Toys Report.

For more articles on related subjects, see Made in the USA Toys in TDmonthly and Celebrities Pay Greenbacks for Green in Playzak.

The brightly-colored wooden blocks are cut at angles so that they build slightly askew towers. Each block is approximately 2 x 1.5 x 1.25 inches. The set includes 20 stacking blocks and four roof blocks.
— The toy is aesthetically pleasing; the buildings resemble “something you might see in the desert in Spain,” says Jason Oliver, chief operating officer of Oompa Toys in Los Angeles, Calif., who says the blocks do well with his customers.
— Arcadia won a German Design Toy Award in 2004, plus a 2002 Wiener Spiele Mischung.
— Though recommended for young children, its bold graphic design will appeal to all ages.  6/15/2005 (MSRP: $36.99; Age: 2 and Up)

The 12” Waldorf Towel Doll is an old-fashioned European tradition for new mothers. Made from the finest cotton flannel, this soft towel doll absorbs the familiar scent of the mother, so when babies are alone in bed, the calming effect leaves them feeling safe and happy. Made in Germany of cotton flannel, the machine-washable doll has a hand-embroidered face.
— When asked about best-selling gifts, Jude Larene, owner of Izilla Toys in Seattle, replied, "The Käthe Kruse towel dolls. They're probably my single best selling category. They have 10 different styles. They just sell very, very well." He said he sells about 10 per month.
— Four of 45 retailers said the dolls and towel dolls from Germany are popular gift items.
— "Käthe Kruse Waldorf towel dolls are the first friend of a baby — something to cuddle and love. [They] are made of all natural fabrics," said Marion Hohmann of Käthe Kruse. 7/23/2007 (MSRP: $19.95; Age: 0 and Up)

This high-quality, adorable duck is from Trudi, the premier Italian plush company. Each animal is made with great care under the direction of master artisans, and Trudi gives a lifetime guarantee on all its products. The duck is 6.8" tall.
— Trudi plush are best-selling items at Red Wagon Toy Co. in Woodstock, Vt., Owner Kim Smith told TDmonthly in summer 2007. 8/22/2007 (MSRP: $12.00; Age: All Ages)

Dudley is a chunky and tough dump truck: He tips, he drives and he shakes, too. Turn the power switch for great tipping action, then drive off-site with the powerful friction motor and realistic engine sound. This eight-piece set includes barrels and traffic cones to collect and dump, a driver friend and a sturdy carry handle.
— "I love Wow Trucks," was the enthusiastic reaction from Elaine Hackney, owner of JP Boing's Toy Shop in Jamaica Plain, Mass.
— "They are big and chunky plastic infant toys that appeal to the adults for those reasons," observed Joanne Farrugia, owner of JaZams in South Pennington, N.J.
— Dudley is big, fun and noisy … but doesn’t need batteries. “His cute and chunky styling is perfect for little hands,” explained Tanya Laperouse of WOW. “Each toy also comes with fine accessories that can be interchangeable with the rest of the range, making for even greater worlds and adventures to discover.” ( 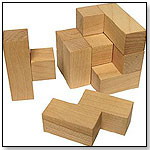 The soma cube is made from beautiful hard maple and finished with a light coat of polyurethane. This seven-piece puzzle features three-dimensional pieces that, together, measure about 2 ½” cubed. The solution is available on the company’s website. “The soma cube is available in single units, perfect for the small specialty store [that doesn’t have] a lot of room but wants to offer unique games,” Barbara Rainville, marketing manager for Maple Landmark, told TDmonthly. Launch date: March 2007. 6/25/2007 (MSRP: $9.00; Age: 8 and Up)

The NameTrain thematic cars include Birthday, American Flag and Sports theme varieties. These cars make the perfect dividers between NameTrain words and are compatible with other wooden track systems. The images are created with a durable digital imaging process that won't rub off. Customizing is available. “These cars extend the NameTrain system to customize even more. NameTrains are not available in any mass retail outlets,” Barbara Rainville, marketing manager for Maple Landmark, told TDmonthly. Launch date: June 2007. $4.90 each. 6/25/2007 (MSRP: $4.90; Age: 3 and Up)

The Read-a-Round, available with red or blue vinyl cushions, gives children a comfortable nook to expand their reading proficiency while building social skills. The two-sided couch has center partitions to keep books close at hand, and provides a beautiful, yet practical, literary center. The set includes the double-sided couch, two semi-circle benches, cushions, six clear tubs and four clear cubbie trays. It comes with a lifetime warranty. The product is “a piece of children’s furniture that provides both elegance and functionality,” Nick Schwarz, director of marketing at Jonti-Craft, told TDmonthly. Launch date: November 1, 2006. 12/5/2006 (MSRP: $977.80; Age: 5 to 10)

The enchanted paths in the mysterious forest change direction again and again. However, with the right knack, enough courage and perseverance, all players will find the shore of the enchanted lake that shows them to their destination: a mysterious mythical creature. The path holds magical surprises that may require a detour. The board comes with turntables, six wooden playing figures, 18 cards, dice and instructions. The board’s “six turntables [change] the direction to walk; that can help get you to your destination quicker, but that also can hamper your co-players,” Matthias Menzel of Selecta told TDmonthly. Launch date: July 2006. 12/14/2006 (MSRP: $30.00; Age: 6 and Up)

A kids' playhouse is a place where make-believe blooms into the kind of playtime that produces huge benefits. You don't need a lot of plastic bells and neon-colored whistles either, because a well-built outdoor playhouse that's made from high-quality, natural materials is best, and will last the longest. A sturdy, wooden playhouse is durable, and will stand up to both the elements AND your kids rough housing. 9/26/2007 (MSRP: $2549.00; Age: 2 and Up)

In this card game for two to four players, the goal is to capture Capt’n Gold Tooth and his men by searching and quickly counting the “wanted” cards that identify crew members. The game comes with a skull-face pirate’s ring. 11/28/2007 (Age: 6 and Up)