Frogs and Bugs Creep to the Top

By Julie L. Jones
April 2009
This month, there are some exciting breakthrough additions to the traditionally steady list of best sellers for the specialty toy industry — namely, sustainable Eco-Aquariums from Wild Creations and the HEXBUG Micro Robotic Creatures from Innovation First. See what else made the list, based on a survey of independent toy-store owners across the nation.

Now more than 10 years old, PlasmaCar continues to intrigue and fascinate with millions of units sole and multiple awards in over sixty countries worldwide. Just sit, put your feet up, and turn the steering wheel to propel yourself forward up to 6 mph on any smooth, flat surface. With a maximum weight capacity of 220 lbs., even parents and grandparents have experienced a giggle by taking it for a spin. Made from state-of-the-art, high-quality ABS plastics, this kid-powered, durable, ride-on vehicle comes in a variety of colors.
— “I can't believe how many of these I sell,” remarked Jacque Flagg, owner of Jacque’s Inc. in Bryan, Texas. In a March 2009 survey, Flagg reported sales of around 20 per month.
— In spring 2009, 41 percent of 60 retailers listed PlasmaCar as a best-selling ride-on in their stores, reporting sales of a dozen per month on average.
Awards: 2012 Parents Choice Awards Recommended, 2009 Green Parents List Check Mark, 2009 DisneyFamily.com Top Action Figures and Toys for Toddlers, 2009+2008+2005 The National Parenting Centre Seal of Approval, 2008 iParenting Media Toy Award, 2008 Fat Brain Toy Award Active Play, 2006 TIA Outdoor Toy of the Year - Specialty Toy of the Year, 2006 Oppenheim Toy Portfolio Platinum Award, 2005 Oppenheim Toy Portfolio Gold Seal Award, 2005 Dr. Toy Best Vacation Products, 2005 Creative Child Seal of Excellence, 2001 International Patent Fair, Hong Kong Gold Medal (

This 89-piece set measures 3.5” tall and includes a functional mast and forks that lift a cargo pallet. Please check with LEGO directly to see if this particular item is available for the specialty market.
— “Lego's been a big huge boost,” Ron Banducci of Games Unlimited told TDmonthly in early fall 2008 when discussing hot-selling tween items.
— “The kids like the challenge of building all the pieces,” said Linda Kapnick, owner of Ambassador Toys in San Francisco.
— Twelve percent of 51 retailers said Lego is a best-selling item for tweens. 9/19/2008 (MSRP: $7.99; Age: 7 to 14) 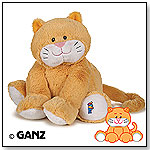 Webkinz Jr. features its own website where smaller boys and girls can play age-appropriate games chosen by their parents. This 12", super-soft Kitty comes with her own secret code that little tots can use to access the online play space.  Launch date: Spring 2009. 1/8/2009 (MSRP: $30.00; Age: 3 to 6)

Listen to the pianist as he performs a song for all to hear.  Includes a figure, white grand piano, sheet music, and stool.  Press the keys of the piano to play two wedding melodies. 2 AAA batteries required.  Recommended for ages four and up. Choking Hazard. Small parts. Not for children under 3 years. 12/8/2008 (Age: 4 and Up)