TDmonthly Magazine recently spoke to 47 specialty retailers about the most in-demand baby gifts at their stores. Favorites ranged from comforting snuggle toys, such as Taggies and baby blankets from Gund, to grabbing toys, such as Manhattan's colorful Winkel and wooden rattles from Haba.  “For baby gifts, people are very conscious of things that are safe,” said Tara Friese, assistant manager at Tree Top Toys in Redmond, Wash.  Here are the top-10 best-selling gifts for babies.

Made of soft fleece printed in a variety of colorful images, the Big Taggies is both a security blanket and a tactile activity for babies and toddlers. The 18” by 18” blanket is edged with 24 ribbon tags that will engage little ones' eyes and fingertips. Taggies are designed to provide warmth, sun protection or just plain comfort.
― “For babies, anything Taggies,” said Patti Tepper-Rasmussen, owner of Learning Tree Toys Books & Games in Oklahoma City, when asked about her best-selling baby gifts in June 2009.
― Five of 47 retailers said in summer 2009 that Taggies are their best-selling gift for babies. 7/10/2009 (MSRP: $24.95; Age: 0 and Up)

Stunning colors give this perennial favorite a lively look. Babies will be engaged and amused by the responsive rattle, and caregivers can safely refrigerate this pliable plastic toy to produce a soothing teether. “We have so much of the Manhattan baby...we sell a lot,” Owner Amy Barrett of Lasso the Moon Wonderful Toys in Helena, Mont., told TDmonthly in early 2007. “People buy them for baby gifts...baby shower gifts. They like them because the colors are so bright.”
— “Winkels from Manhattan Toy — [we sell] about 30 per month,” Burdette told TDmonthly in March 2008. Five percent of the 40 retailers who spoke with TDmonthly in spring 2008 singled out this item as their stores’ best-selling infant and toddler toy.
— "I sell 18 or so a month," Mary Ellen Cerney, owner of Dear Friends & Children in Duncan, Okla., said in March 2009. In June 2009, four of 47 retailers listed Manhattan Toy as their best-selling baby line. In March 2010, two of 39 specialty retailers cited Winkel as a best-selling baby toy.
— In June 2010, five percent of 40 specialty retailers named Manhattan Toy’s Winkel as a top-selling baby product.
— As of 05/21/2012 this product had 4.5 out of 5 stars from 299 reviews on Amazon.com. (

With bright orange paint to capture the eye and smoothly polished wood in round shapes that invite little fingers, the Grrow-l rattle is a whimsical and friendly grasping toy. Made in Germany with non-toxic paints for the bright body and smiling face, the four discs that make up the bear's body click together when they move.
― “Haba everything goes well,” Cathy Albro, owner of Creative Learning Toys in Grand Rapids, Mich., told TDmonthly during a June 2009 survey of best-selling baby gifts.
― “Haba does really well for us,” said Dean Nelson, owner of Wizard Kids Toys in Toledo, Ohio.
― Four of 47 retailers named Haba as their top-selling brand of baby items in summer 2009. 7/10/2009 (Age: 0 and Up) 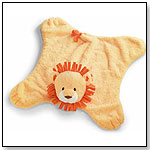 Both blanket and stuffed companion, the 24” Comfy Cozy Lion is made of silky fleece material in the shape of a lion. The big cat's round head has embroidered features and a loose fleece mane that matches the fringe on his floppy tail. When taking a break from play time, toddlers can curl up with their new friend for a short nap.
― “Gund's baby blankets are always steady sellers,” Joe Berardoni, owner of Pun's Toy Shop in Bryn Mawr, Pa., told TDmonthly in June 2009.
― “We do well with Gund,” said Jeri Dorsey, buyer for Kits and Kaboodle in Carmel, Ind., when asked about his top-selling baby gifts in summer 2009. 7/10/2009 (MSRP: $32.00; Age: 0 and Up)

Geometric Sorting Board by PLANTOYS 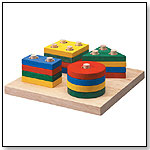 On a simple base of naturally finished rubber wood, four sets of pegs are set up to match 16 colored wood shapes. Whether matching the shapes to their respective pegs, sequencing the colors, or exploring other combinations, children can develop motor skills, problem solving and spatial reasoning. The Geometric Sorting Board is manufactured out of sustainably harvested rubber wood and colored with safe vegetable dyes.
― During a June 2009 survey of best-selling baby gifts, two stores told TDmonthly that Plan supplies their top-selling items. 7/10/2009 (MSRP: $19.99; Age: 0 and Up)

With non-slip suede soles and gently elasticized ankles to keep these first shoes on little feet, Robeez are designed to protect and stabilize early walkers while not restricting children's feet. This pair is decorated with appliques of koala bears complete with soft fringe tufting the ears.
― “In my infant section, I sell a lot of Robeez shoes consistently,” Janet Gregory, owner of Over the Rainbow Toy Store in Anchorage, Alaska, told TDmonthly in June 2009.
― Two of 47 retailers said in early summer 2009 that Robeez shoes are the most popular baby gift in their stores. 7/10/2009 (MSRP: $28.95; Age: 0 and Up)