On a Snowy Day, Watch These Toys Play

Snow and rain can keep kids inside during February, so take a look at some toys that will make home feel cozy and fun.

Retailers: Did you know you can broadcast TDmonthly Toy Videos from your website?  Manufacturers: Find out how a TDmonthly Video attracts buyers. 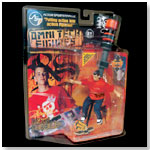 This Omni Tech figure representing professional skateboarder Ryan Sheckler features the Omni Tech Figures™ technology that enables the movement of the action figure and the skateboard both independently and together, allowing the toy to move with life-like movement and execute skateboard tricks. The key is in the high tech design of the OMNI HANDLE which gives you complete control of the figure and its board. It's simple to use, but difficult to master. (

This interactive computer program features games and activities designed to help children practice articulation skills. It uses speech recognition technology that monitors children's speech into a headset; characters respond to their voice in various practice drills. It includes a Lesson Mode and Free Play Mode, and there are easy, medium and hard difficulty settings. The Home Version stores up to three player profiles, while the Professional Version accommodates up to 15. (

It's the kit that gets you going (ages 6+)  The Shailie™ Starter includes one life size pink and white polka dot dress form, a must for any aspiring fashion designer.  The Starter also includes the Base top and skirt so you can easily attach and detach all of your Shailie™ dress pieces and accessories, a Starter dress - in 9 pieces, and a Shailie™ Closet for storage. (

Dress Tiana and Prince Naveen for a day of imagination and fun! Each tin consists of 2 characters printed on the tin, activity card to be used on the tin and 1 sheet of magnets. (

This Hop Ball is the very best quality in hopping balls! Made from the super strong, yet soft latex-free vinyl material for long lasting use and durability. Great exercise product for indoors and smooth safe outoor surfaces. Promotes children's body coordination, balance, and lymph circulation. Special patented handgrip safety handle. Maximum sustainable weight up to 600 lbs based on the size of the ball. (

Buckyballs™ by Zoomdoggle by MAXFIELD & OBERTON 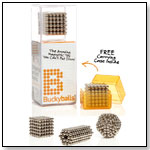 This set includes 216 powerful rare earth magnets that can be molded, shaped and snapped together in an endless variety of configurations. Each Buckyball has two poles — one repels, one attracts. Not intended for children. Watch video
— ''Pun's has sold about four dozen in the last month alone,'' Joe Berardoni, Sr., owner of Pun's Toy Shop in Bryn Mawr, Pa., shared with TDmonthly in the fall of 2010.
—Jeanette Lauture, owner of Aunt Jean's Toys & Treats in Montclair, N.J., sold nine of 24 units in two days after opening a box for display, she told TDmonthly. Two of 39 retailers named Buckyballs as a best-selling travel toy in March 2010.
— Dean Smith, Co-owner of JaZams in Princeton, N.J., told TDmonthly in a Summer 2011 survey that he sells "probably 50" sets of Buckyballs each month.
— May 27, 2010 RECALL of 175,000 sets (prior to March 2010) with 13+ labeling violating a federal standard that powerful magnets not be sold to children under 14. (

This fragrance-free natural sculpting dough is certified organic and certified gluten free. Packaged in recyclable and reusable containers, the naturally anti-microbial dough is made in the USA. It comes in brown, white, yellow, red, orange, purple, blue and green. ( 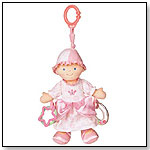 This Little Princess 9" activity toy features rattle, squeak and crinkle sounds. It can hang from a crib or stroller. Launch date: 2010. (

Using VELCRO brand closure, petals, flowers, jewels and skirt pieces simply attach to the base skirt and top. Girls can mix and match skirt tiers, layered petals, jewels and flowers to create and recreate their own good fairy. Fairy includes a total of 54 pieces. NO SEWING REQUIRED Awards: TDmonthly Innovations 2009 (