According to a June 2010 TDmonthly Magazine survey of 40 specialty retailers, outdoor and water toys have seen massive sales increases with the onset of summer, and trend-conscious favorites Silly Bandz from BCP Imports and Hexbugs from Innovation First continue to lead the pack. Games, particularly Bananagrams and Blue Orange’s new Spot It, were also mentioned as consumer favorites. See this month’s top-10 best sellers below: 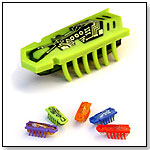 These robotic creatures behave like real bugs. Kids can go online to register and track their Nano collections. Additional bugs, track, habitats, carrying cases and more are available separately.
— Five of 40 retailers told TDmonthly in June 2010 that the Hexbug is a top-selling product. In July 2010, 11 percent of 38 retailers named Hexbugs an overall top seller.
— In a June 2010 survey, two of 40 retailers told TDmonthly Hexbugs are a top-selling gift for boys ages 4 to 12. ( 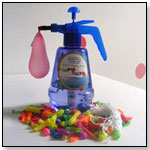 Iwako Cow Eraser in Six Colors by BC INDUSTRIES

This pool toy looks like a swim aid but is designed to surprise other swimmers by shooting water up to 30’. It comes in a variety of colors.
— “It's made from the same stuff as the noodles,” Gwen Bowden, manager of Doodlehopper for Kids in Springfield, Va., told TDmonthly in July 2008. “We sold 28 in two weeks. It's a good seller, and we'll run out of it.”
— "We've sold over 4,000 in two-and-a-half years," Ron and Sue Banducci of Games Unlimited in Danville, Calif., told TDmonthly about this top-selling gift for boys.
— Three of 66 retailers mentioned water or pool toys when asked about best-selling gifts for boys in summer 2008. Three of 40 retailers named Max Liquidator Eliminator as an overall best seller in early summer 2010.
AWARDS: 2010 TDmonthly Top Seller 8/28/2008

This fishbowl features three happy residents for puzzle play. The extra-thick, three-piece wooden puzzle includes a fish, a turtle and a crab, each with jumbo wooden knobs for easy grasping. Full-color, matching pictures appear underneath each piece.
— In a Summer 2011 survey, 5 out of 12 retailers told TDmonthly that wooden peg puzzles from Melissa & Doug were their best-sellers in the category.
— As of 7/12/2011 this product had 4.5 out of 5 stars from 32 reviews on Amazon.com. Pros: Durable; age-appropriate; puzzle pieces fit well. Cons: One reviewer said the veneer on the puzzle pieces began peeling a month after purchasing it.
— In a June 2010 survey of 40 specialty retailers, 15 percent named Melissa & Doug as an overall top-selling brand. Two retailers told TDmonthly that the brand’s puzzles sell especially well. 7/8/2010 (MSRP: $9.99; Age: 1 and Up)

Part of the Wild Creations eco-aquarium line, the Bamboo Water Garden comes with a 12" spiral bamboo, two frogs, a snail, and choice of base. This balanced ecosystem offers a low-maintenance way for children or adults to enjoy an aquarium environment.
— Two of 40 specialty retailers cited Eco-Aquariums as a June 2010 best seller. The same month, David Campbell, owner of Amazing Toys in Great Falls, Mont., told TDmonthly his store sells about 15 Eco-Aquariums each month. 2/25/2009 (MSRP: $50.00)