This kit is designed to teach children scientific principles while recycling common trash to create toys. Projects include a hover device and a cyclone tube. Parts and instructions are included.
— In an August 2010 survey, 12 percent of 43 retailers named Toysmith science kits a top seller in the science and nature category.
— “The Eco Science Toys from Toysmith have done pretty well … the whole line.” Jeff Oslick of The Enchanted Toy Store in Fullerton, Calif., told TDmonthly in late summer 2010. 9/9/2010 (MSRP: $13.99; Age: 8 and Up)

This kit lets children grow up to nine large crystals, including "golden citrine," "emerald green" and "aquamarine blue." It includes a bag of granite stones, LED display stands, goggles and detailed instructions.
— As of September 2010, this product had 3 out of 5 stars from 2 reviewers on Amazon.com. One reviewer described the kit as "amazing," but consumers complained the crystals took too long to grow.
— In summer 2010, four of 43 retailers told TDmonthly that rocks and crystals are best selling science and nature products. 9/9/2010 (MSRP: $24.99; Age: 10 and Up)

Soda Pop Science is a unique kit that lets kids invent their own secret soda formulas, create some fizz, experiment with flavors and colors, conduct taste tests and make wild, fizzy drinks for their friends. “Soda Pop is a very original kit and was the product of a collaboration with early learning experts at the University of California Berkeley GEMS program,” Jean Bessette of Scientific Explorer told TDmonthly. “This kit has won several awards.”
— In a summer 2010 survey, three of 43 specialty retailers named Scientific Explorer kits a top-selling product in the science and nature category. One retailer cited the Soda Pop Science Kit as a favorite.
— “Scientific Explorer is our number-one science line,” Casey Sartain, buyer for Tutoring Toy in Salt Lake City, Utah, told TDmonthly in August 2010. 11/27/2006 (MSRP: $19.99; Age: 9 and Up) 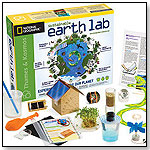 The Sustainable Earth Lab science kit gives children the tools and information to learn first-hand about the environmental problems burdening the planet and how we can overcome these challenges through sustainable practices. The full-color, 48-page manual explains over 40 different experiments and energy conservation activities. Awards: Dr. Toy Best Green Toy Award 2010
— In late summer 2010, five percent of 43 retailers named Thames & Kosmos a top selling science and nature brand.
— “Thames & Kosmos — we sold out of all their items,” Carly Gerhardstein, manager of The Durango Kid in Durango, Colo., told TDmonthly in August 2010. 8/13/2010 (MSRP: $54.95; Age: 8 to 12) 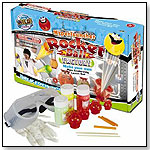 Children can make mass accelerating launch balls and discover the science of elastic collisions with this kit. Users can even mix and mold a supercharged planet collision accelerator that fires a small "moon" into orbit. The kit includes four graduated-size molds and instructions and materials for over six activities.
— In August 2010, Jessica Wood, buyer for Northshire Bookstore in Manchester, Vt., told TDmonthly her store sells “Approximately six (Hyperlaunchers) per month. I just got them back in, but I sold out right away." 9/9/2010 (MSRP: $16.99; Age: 8 and Up)