Thinking Ahead and Regenerating Keeps You on Track

By Alison Marek
May 2011
One of the prime reasons to take time to organize is so that you'll avoid some of the costliest mistakes of running a toy store: over-ordering, under-ordering and ordering too late or too early. Timing, terms and product selection are crucial, specialty toy store owners told TDmonthly, as is knowing what the customer wants.

"The trick of being a good buyer is looking at the past history of your store, knowing the current trends, [and] knowing what can sell and what assortment you need to balance out your store," Daniel Butler, vice president of merchandise and retail operations for the National Retail Federation, told TDmonthly.

Here are some tips:

1. "We have a POS (point-of-sale) computer system we've been using for 20 years," said Peter Scott, co-owner with wife, Sara, of Perfect Toy in Avon, Conn. "It allows us to track what's moving, so we can get a good idea of what the selling course has been through the year." Scott warned, however, that sales from the previous year have no bearing on the current year.

2. About 80 percent of the toy-store owners surveyed by TDmonthly said they place at least two big orders per year: once in the summer (usually July or August) to get ready for Christmas (see Ch. 5 Stay Ahead of the Holidays) and once in January or February to replenish depleted stock and have the right toys and games for the Easter and summer surges.

3. "People buy for all holidays, not just Christmas," stressed Stephen Medina, communications manager for Schylling Toys. He pointed to Easter, the Fourth of July and summer vacations.

4. Retailers generally order anywhere from two to six months before they actually need product, which means they spend another two to four months prior to that researching the toys they need and how much they should buy. TDmonthly schedules its editorial calendar according to this pattern.

5. Large orders allow you to take advantage of freight deals and other specials, plus help establish you as a player in the eyes of the manufacturers. By placing a large order and establishing terms with a company, you get treated right on small orders you then place as needed throughout the year, said retailers.

6. Many storeowners ask for specials and try to negotiate deals — including better freight pricing and terms — for their follow-up orders, too.

Get Help From Reps

Maintaining a good relationship with your reps can alert you to new products and deals that can help you make or save money, so be sure to schedule regular contact with them as part of your organizational plan.

"[Reps] are a great resource. … [They're] witnessing what is selling well," Medina told TDmonthly. They also know about freight and specials, he said. Owner Angel Stahl of Angel's Toy Barn in Greensburg, Pa., noted that some sales reps helped her add new items to a purchase order that had back-ordered items. "This is a big help when a customer needs something quickly," she said.

Reps can also help if you suddenly don't need an item, because you've ordered too much.

Tony Hoyt, co-owner of Hummingbird Toys & Treats in Arlee, Mont., said, "One of the sales guys I deal with will take stuff back."

In addition to the year's major orders, retailers need to consistently review sales and determine which toys should be re-ordered, and what new product is needed in the store. Although most retailers said they would quickly re-order a product if they sold out, some are more hesitant.

"For companies where I can easily put together the freight, I'll do it right away. If not, it had better have some pretty heavy customer pull behind it for me to order it," Owner Dan Willis of Communique Toys in Seattle told TDmonthly.


How to Plan for Toy Fair

Know what you need even before you get to the show, and your Toy Fair experience will be twice as rewarding. Here are tips that retailers have passed on to TDmonthly readers. We even created a video to help you remember key points: After the show, check back at TDmonthly.com to watch our video toy demonstrations from Toy Fair and read what other specialty retailers had to say about the year's toys and games.
PREPARE FOR TRADE SHOWS

An essential part of your organizational plan is deciding which trade shows to attend, who attends with you, who runs the store while you're gone, how much you're willing to spend, and what you intend to get out of the show. Thirty-three of 45 retailers surveyed told TDmonthly they attend Toy Fair or other trade shows for product research.

"Toy Fair is the best way to research toys because you can touch them and play with them," (Fig. 9.3) offered Patricia Masing, owner of Tree Town Toys in Ann Arbor, Mich.

TDmonthly also features trade-show preview articles. We even bring back video demos from the shows so you can see the toys you missed or have forgotten.

Toy Fair's not for everyone. Neither are other trade shows.

"I don't go to shows," Harriet Story, owner of Leaping Lizards in Mineral Point, Wis., told TDmonthly. "I mostly network with customers and other toy stores [to find new product]."

How do you decide which shows to attend? It depends on what you need:

1. Forty-one of 50 retailers who attend the American International Toy Fair also add other shows to their itineraries to ensure a well-rounded product line. Gift shows and educational product shows are at the top of most retailers' lists. [TOYDIRECTORY regularly updates its trade show and event list so you can plan your schedule months in advance.]

2. Attending local trade events minimizes the expense of traveling and may increase the chance of finding products for your particular demographic.

"When I go to a gift show … I'm looking for that odd company that no one knows about," explained Pamela Buars, owner of The Ark, which has branches in San Francisco and Berkeley, Calif. She generally attends two trade events a year.

"Pomona is more low key," John Naisbett, owner of Thinker Things in Solana Beach, Calif., said of his local show, which is now held in Long Beach. [WTHRA]. "We are able to get a more quality experience and to get more information from the manufacturers."

3. The ASTRA Marketplace was mentioned as a favorite by 19 of 98 retailers. Retailers cited networking as one of the main reasons for attending trade events.

4. Between the expenses of travel and lodging, 21 toy-store owners shared with TDmonthly that Toy Fair just isn't worth it. (see How to Plan for Toy Fair)

Nevertheless, Toy Fair is the sole trade event for seven of 98 retailers who spoke with TDmonthly.

"The No. 1 reason is to see new products in one place and meet up with reps," explained Ray Goodhart, owner of Ages & Stages Toy Box in Golden, Colo. 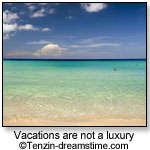 MAKE TIME FOR TIME OUT

Half of the surveyed retailers who stipulated how they'd spend extra time if they had it answered "sleep" or "vacation." And though those two things may seem like a luxury when running a successful business, Dr. Jan Yager, author of "Creative Time Management for the New Millennium" insists they're not.

Pacing yourself throughout the day, scheduling regular breaks for lunch, getting sufficient sleep, and taking vacations are necessary, she told TDmonthly.

"What's paramount is that it is an actual change of pace," said Yager, who also authored "Work Less, Do More" (September 2008, Sterling Publishers).

Here's how she suggests you manage time off:

1. "If you're going to keep in touch with the office, don't spend all the time at the beach looking at your emails and cell phone," she warned.

2. However, avoiding emails and calls altogether may create a situation where you need another vacation after returning from vacation. Delegate some of your quotidian tasks to an employee or partner while you're gone, she said. Activate the autoresponder on your email. 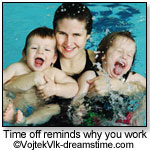 3. You can also "work a little bit more and get ahead before going on vacation," she suggested. "Also, start winding down if possible. If you're planning to go on a trip June through August, then you have to be concerned about what you're saying ‘yes' to."

4. Once you've scheduled your vacation, advised Yager, stick to your commitment.

5. "Vacations don't just replenish the worker," she said. "Vacations are a time to reconnect with family and friends. They provide a strong reinforcement that can really help to remind you why you are working."

6. When you return, try to leave a couple of days to readjust before returning to work, particularly if you've crossed any time zones.


"Reeducate yourself that you need seven to eight hours of sleep a night." — Jan Yager, Ph.D., author
Lack of sleep may be a badge of honor in today's 24/7 society, but "Sleep deprivation is a major preventable cause of driving-related accidents and fatalities as well as work-related accidents," pointed out Yager, who believes that all-night exam crams during college set a dangerous precedent. "Research shows that performance will be poorer because of loss of sleep as well as putting oneself in harm's way getting to an exam."

Sleep is within your control, she insists. "Reeducate yourself that you need seven to eight hours of sleep a night," she continued. "It's similar to a vacation, in that you have to be reeducated that it's not a luxury; it's a necessity. Not only is performance, driving ability and accident-prone status impacted, but so is mood. You might make your deadline, but if your temper is short because you got so little sleep, you might actually undo the benefits of getting something in by that due date." Rather than skimp on sleep, vacations and breaks, Yager summed up, it's better to be more realistic about deadlines in the first place and to use other ways to save and manage time.