Most Anticipated Toys of 2011

When TDmonthly’s regional correspondents asked 14 specialty toy retailers what toys they most anticipated for 2011, three mentioned Perplexus by Plasmart.

“I have been anticipating the new Perplexus models; they're Squirvy Murvy and Braincramp,”  shared Mary Sisson, co-owner of  Kazoodles in Vancouver, Wash. “We've done really well with Perplexus.”

“[Cloud B is] supposedly coming out with a musical Twilight Turtle which will show a constellation on the ceiling plus play music,” Diana Gisolfu, co-owner of Sisters Kids in Springfield, Mass., told TDmonthly. “Cloud B is my number-one product in the store.”

Robert Hunter, manager of Toy City in Keene, N.H., was looking forward to new products from the Creative Whack Company, makers of the Ball of Whacks.

For Richard Gibson, owner of Learning Express in Newton, Mass., the answer was easily constructed: “The new LEGOS have been huge,” he said.

Here are older models of next year’s most-anticipated toys: 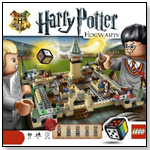 Product features 1 buildable LEGO Die, 9 LEGO microfigures which includes Harry Potter, Hermione Granger, Ron Weasley, Draco Malfoy and Albus Dumbledore, building instructions and 1 rule booklet, and 332 LEGO pieces.  For 2 to 4 players.  Be the first to successfully navigate the magical castle to collect all your homework from your classes and get back to your common room.
— In late Spring 2011, 5 of 12 retailers surveyed said that LEGO was their best-selling brand of licensed products. Joe Berardoni Jr., Owner of Pun's Toys in Bryn Mawr, Pa., said that "We try to avoid licensed products...that said, however, we still do carry LEGO, and their licensed kits sell well, such as Star Wars and Harry Potter."
—As of 10.25.2010, this product had 4.5 out of 5 stars from 30 reviews on Amazon.com and was No. 7 on the top 100 best-selling toys and games. PROS: Build your own gameboard. CONS: Not suitable for younger kids. 10/25/2010 (MSRP: $29.46)

The new Ball of Whacks features six brilliantly contrasting colors, creating 30 magnetic pyramids that can be arranged into a multitude of shapes and mosaics. Additionally, the pieces can be configured according to the included color-design challenges for even more brain-teasing fun. Launch date: February 2008.
— “Unlike most brain-teasers or puzzles, there are no wrong ways to play with the Ball of Whacks,” Creative Whack Company Communications Director Lynn Araujo told TDmonthly. “Every time you pick it up, you'll be inspired to find new ways to play with it.”
— The Ball of Whacks is a best seller at Kazoodles in Vancouver, Wash., Co-owner Mary Sisson told TDmonthly in early 2008.