When TDmonthly Magazine interviewed retailers about their best-selling Infant & Toddler toys in April 2012, one item raised its neck above the competition for the 4th year in a row: Sophie the Giraffe from CALISSON INC.. Other perennial favorites that have made the list for years include the Twilight Turtle from CLOUD B and Comfy Cozy blankets from GUND. However, the most mentioned brand overall was International Playthings, with four of the 11 retailers surveyed naming on of their products as a best seller for the category.

Learn more about all the Top-10 products, below. 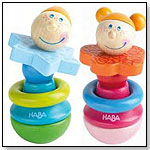 Baby’s new best friend! The Monsieur and Madame wooden clutching toys have charming faces and colorful moving parts to keep baby interested. Made in Germany using beech wood from sustainably managed forests. Approx. 4 ½” Launch date: September 2011.
— Kai Rady, owner of Shenanigans Inc in Charlottesville, Va., told TDmonthly in a 2012 survey about infant and toddler products that wooden rattles from HABA were one of her best sellers. 8/23/2011 (MSRP: $14.00; Age: 0 to 5)

"While there are several stacking toys on the market, none of them are circular and included the added element of balance.  Tobbles is a stacking toy which encourages children to explore and discover," Erik Quam, Director of Product Development at Fat Brain Toy, told TDmonthly.
Awards: 2011 Finalist for ASTRA's Best Toys for Kids
— Melodie Ingwersen, owner of Creative Kids Inc in Columbia, S.C., told TDmonthly in an April 2012 survey about best selling infant & toddler products that they sell 2-3 dozen Tobbles each month. 5/27/2011 (MSRP: $24.95; Age: 1 and Up)

Made of comforting fabrics and textures, Gund Comfy Cozy 24" blankets are available in various styles and colors. They feature satin paw pads and are machine washable. A 12" size is also available.
— Gwen Bowden, manager of Doodlehopper 4 Kids in Springfield, Va. told TDmonthly in late Spring 2011 that Comfy Cozies were a best-selling toy in the infant & toddler category.
— Elmer Carranza, assistant manager of Doodlehopper 4 Kids in Falls Church, Va., told TDmonthly in an October 2011 survey that Comfy Cozy blankets are their best selling keepsake item. They sell about a dozen each month.
— Want this? As of 05/06/2011, this product was available for purchase at Doodlehopper 4 Kids. 6/25/2010 (MSRP: $32.00; Age: 0 to 5)

Baby Farm Friends Bowling from the Earlyears line includes six numbered pins with a soft weighted ball so baby can practice coordination and counting at the same time. The cushiony pins make soft sounds and resemble farm animals including a cow, pig, sheep, dog and duck. The colorful ball has its own distinctive chiming sound and the pins are distinctively numbered from one to six and are easy to stand up. The toy comes with a reusable zip bag, so when kids are done with it they can put it back. This toy won an iParenting Media Award. "Bright, colorful and classic, it's a must for any 12 month-old," Sue Tice, public relations manager for International Playthings, told TDmonthly.
— "We actually have baby bowling — soft cloth pins and balls — by International Playthings that does well," said Cheryl Pyles, manager at Toyland in Milford, N.H., when predicting hot-selling baby items for Christmas 2007.
— "It's all seasons for babies, and International Playthings for babies and toddlers," said Patricia Masing, co-owner of Tree Town Toys in Ann Arbor, Mich.
— Gwen Bowden, manager of Doodlehopper 4 Kids in Springfield, Va. told TDmonthly in late Spring 2011 that this soft bowling set was a best-selling toy in the infant & toddler category.
— Want this? As of 05/06/2011, this product was available for purchase at Doodlehopper 4 Kids. 11/21/2005 (MSRP: $22.00; Age: 1 and Up)

These new and safety-approved capless egg shakers provide kids with quick, delicate and responsive shaker sounds. Constructed of durable wipe-clean plastic and filled with non-toxic steel shot, the Egg Shakers make sweet, reliable and rhythmic sounds for kids and adults alike. "Our egg shaker is unique because of our patented design sealing process. Other egg shakers are seamed in the middle or have a glued end cap. In other words, ours is safer and has a better appearance," said Ray Enhoffer, director of R&D at Latin Percussion.
—  "Shakers are the type of toy that might be selling in the music section. We get them from LP RythMix," said Tristan Hewitt, manager at Dragon's Toy Box in Seattle. “Everybody needs some egg shakers,” said Janet Gregory, owner of Over the Rainbow Toy Store in Anchorage, Alaska. “They’re perfect for baby hands, and I sell them to lots of grown-ups for all kinds of things.”
— Two of 45 retailers told TDmonthly in 2007 that shakers from Latin Percussion are popular with their customers, citing sales of about 30 and 120 units monthly. Six percent of 68 retailers said in July 2008 that egg shakers are their top-selling musical toy.
— Egg shakers are “perfect for little ones to hold in their baby hands, and non-toxic,” Diana Nelson, owner of Kazoo & Company in Denver, told TDmonthly of this best seller in her store in January 2009. “It's something simple and not too noisy for a parent; I think that's why they do well,” explained Sherry Peddie, manager of  Applause Kids in Bracebridge, Ontario, in January 2010. 7/23/2007 (MSRP: $6.50; Age: 2 and Up) 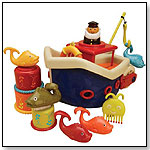 For ages 6 months and up. The bathtub is baby's ocean. Set includes 13 toys in a floating boat; captain; life preserver; fishing hook & 4 ready-to-catch fish; 3 nesting cups that shower, stack & pour, octopus comb & whale nailbrush. Everything stows away below deck.
Awards: American Baby Toy of the Year Award.
— Mary Porter Green, owner of The Curiosity Zone in Ashburn, Va., told TDmonthly in a 2012 survey that their best selling infant & toddler products are from Toysmiths "B." line. "Though expensive, it has great packaging and is perfect for gift giving. Fish & Splish is an especially great product," she told TDmonthly. She also said this item was a best seller in the bath category. 4/6/2012 (Age: 1 to 3) 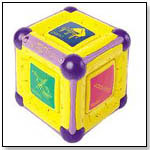 With this award-winning product, children can add or subtract instruments with the touch of a button, and lights flash along with the music. With harp, flute, French horn, piano and violin instrument buttons, one orchestra button, and soft, rounded corners, it provides hours of interactive play. The product "gives children the opportunity to learn specific musical sounds of five different orchestral instruments and how they interact together to create a Mozart masterpiece.  It inspires creativity by putting the child in the conductor’s seat,” Doug Gillespie, vice president of marketing at Munchkin told TDmonthly. Launch date: 2000.
—  As of 8.30.10, this product had 4 out of 5 stars from 38 reviews on Target.com and was listed in the top 30 best-selling toys and games. PROS: Safe, durable, interactive and engaging.
— Kai Rady, owner of Shenanigans Inc in Charlottesville, Va., told TDmonthly in a 2012 survey about infant and toddler products that the Mozart Magic Cube was one of her top sellers.
— "This past December [2012] we sold several Mozart Magic Cubes from Munchkin. Even the price tag in the mid forty dollar range did not stop our customers," Joe Berardoni, owner of Pun's Toys in Bryn Mawr, Pa., told TDmonthly. 12/7/2006 (MSRP: $20.00)