By Alison Marek
June 2012
Schoenhut Piano Company was thrilled with the outcome of their second big TDmonthly charity giveaway. The first, in 2010, culminated with then-teenager Kimberly of South Carolina giving away 100 My First Piano IIs to 10 different local children’s charities. This year, Schoenhut participated in TDmonthly's "2012: A Year of Charity" giveaway promotion, where specialty retailers vied for the chance to give to their local charities more than 100 high-quality toys and instruments from specialty manufacturers. 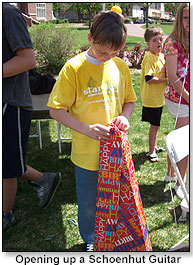 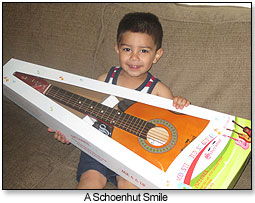 “Schoenhut offers tremendous value,” noted Diana Nelson of Kazoo Toys in Denver, who carries Schoenhut and the other participants’ brands. Her charities were Starlight Kids and Ronald McDonald House Charities of Denver. “All of the toys were great quality toys with an educational bent.”

To be sure the amazing instruments were as impressive as possible for her giveaways, Sari Powazek and her staff at Doll House & Toy Store in Scottsdale, Ariz., built at least one of each color of the pianos, which included a Piano Pal, Baby Grand and My First Piano. The representatives of her charities –The Crisis Center and Devereaux House-- were astounded by the display.

"It was wonderful seeing the joy on their faces," Sari told TDmonthly. "They’d had no clue how wonderful it was going to be!"

Both institutions are using the pianos in the public spaces, so that they’ll be used by the maximum number of children.The Crisis Center is keeping a Schoenhut piano until next year, when they'll use it as a raffle to raise funds. 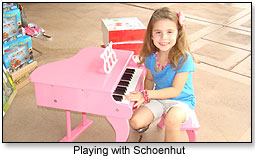 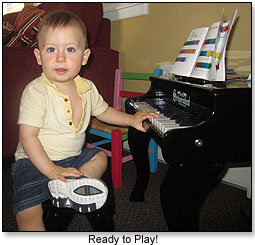 “I think the pianos are great,” said Sari. “Music is soothing, and for children who have problems, is especially soothing. It’s soothing for them to create their own music.”

Although she’d never carried Schoenhut before, she intends to order from them now.

Lynn Martinez, manager of Partnerships and Resources at The Hope House of Colorado, which was one of Jake’s Toy Box in Arvada Colo.’s charities, said that they'd built one of the black Schoenhut Piano Company grand pianos and called a mother whose 3-year-old daughter showed musical talent.

"As soon as she saw it she sat down and asked to play," Lynn relayed to TDmonthly. "When I told her that she was getting a pink one she was so excited. She jumped right up! She could not wait to get it home so she pushed the piano in the box out the door and towards the car!" 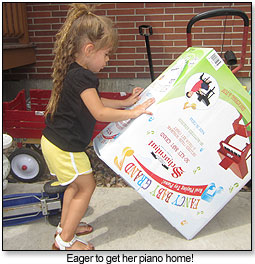 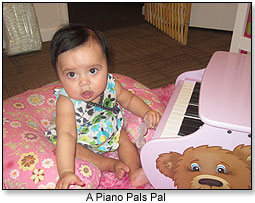 “Schoenhut’s generosity amazes me,” added Dan. “I was very impressed by the line.”

Now that he’s been in the toy business for a year and a half, Dan also realized something else – that the less expensive baby pianos he’d been carrying were actually knock-offs of Schoenhut’s My First Piano.

“It’s nice to discover the source of the quality piano,” commented Dan. “We already work with Safari and will be working with Schoenhut.” 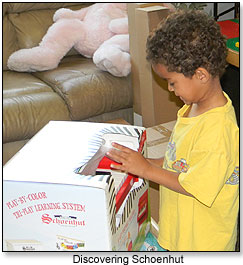 In addition to benefiting hundreds of kids and boosting the visibility of three special toy stores, TDmonthly's "2012: A Year of Charity" had an extra benefit for Dan and his wife Jill. The couple had taken over their toy store from previous owners in homage to their son Jake, whose favorite store it was before he died at the age of 4 years. Just before winning the TDmonthly contest, the family suffered another blow: Jill was diagnosed with a brain tumor. 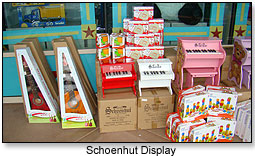 “My wife is headed today to do a new round of chemotherapy,” shared Dan. “What TDmonthly gave to us, what all the manufacturers gave to us, was a vehicle to experience joy and happiness during some really bad times. For that, I thank you.”

Dan’s charities were Stride, Hope House and The Family Tree. "We are very excited about the donation and hopefully the media attention this will bring to Jake’s Toy Box," said Dana Juniel, director of PR and marketing for The Family Tree. She succeeded in bringing local focus to the event and Channel 8 is preparing a short feature on Jake's Toy Box and the giveaway. 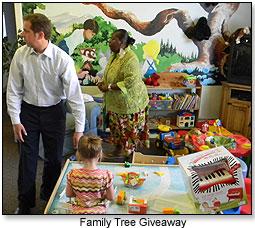 The charities that Schoenhut helped out with TDmonthly's "2012: A Year of Charity" were:
Ronald McDonald House of Denver, Starlight Kids, Devereaux House, The Crisis Center, Stride, Hope House of Colorado and The Family Tree.

The winning retailers, who were able to stage events at their stores and pick their favorite charities were Diana Nelson of Kazoo Toys in Denver, Dan & Jill Driver of Jake's Toy Box in Arvada, Colo., and Sari Powazek of Doll House & Toy Store in Scottsdale, Ariz.

Specialty toy store owners: Enter to win the latest round of TDmonthly’s "2012: A Year of Charity" and get the chance to give away 100s of educational products to your local schools and children’s charities! Find out how here.

Schoenhut ® Piano Company: "Leader in the World of Toy Pianos since 1872" Schoenhut’s® bright red, 18-key tabletop is the perfect choice for a toddlers first piano. Both fun and educational, it is an ideal instrument to use for developing eye-hand coordination and encouraging musical creativity.

Schoenhut’s® patented Learning System, with its play-by-color teaching method, makes playing simple and fun. A removable color strip fits behind the keys to guide small fingers from chord to chord. The chart also works on adult keyboards, since keys on Schoenhut® toy pianos are of corresponding width. This teaches children proper "finger stretch" from the very beginning. The accompanying Songbook contains a collection of familiar tunes. This Learning System has been specially designed to build a child’s confidence and develop basic playing skills.

Imported / Materials: hardwood and hardboard / Recommended age: Three and up

This versatile 25-key piano measures 17" x 12" x 12" and is designed to grow with a child. The main unit, decorated with a whimsical animal's head, sits safely and squarely on the floor within easy reach of a toddler's hands. Later on, the sides with the animal's body can be attached, raising the piano to a comfortable height for an older child seated at the bench. The spacing between the keys is the same as that of a full-sized model, teaching proper finger placement and affording an easier transition to a large piano. 7/12/2010 (Age: 3 and Up)

This Schoenhut 30-inch Acoustic Guitar is a unique introduction to playing for the aspiring young musician. It offers not only great sound and playability, but an affordable price which is attractive to many first-time players seeking a "better-than-average" beginner guitar. 9/19/2006 (MSRP: $28.95; Age: 4 and Up)

Schoenhut's miniature version of a baby grand piano is designed to encourage a child to play and develop a love of music. Elegant in appearance with graceful spindle legs, yet extremely durable and sturdy, it makes a beautiful addition to any home. Lovely chime-like tones are produced by small hammers striking metal rods, the sound that makes Schoenhut toy pianos unique. The two-and one-half-octave span of full-width keys provides a good foundation for the transition to a larger model. Includes: Schoenhut's Learning System and bench.
Awards: 2013 TDmonthly Seal of Approval