Retailers dealt out an unsurprising fact when surveyed about their best-selling card games in September of 2013 - Spot It! from Blue Orange is still number one. Other long time favorites like Set and Slamwich made up the rest of the list. You can learn more about all of the top-10 most-wanted card games below.

Look, see, play and score...a lot. Add cards to a grid, making sure that color, shape, and number are either all the same or all different across the line. Sounds easy but as the grid expands, so do the possibilities. Whoever sees the opportunities will seize the win. Iota – The pocket-sized game that’s big time fun. Launch date: September 2012.
Awards: 2012 Mensa Select
— In a Fall 2013 survey, two out of 12 retailers told TDmonthly that Iota was their best-selling card game. 7/10/2012 (MSRP: $7.99; Age: 8 and Up) 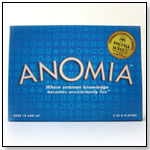 Conceived by a German eye doctor to teach his daughter how to count and identify colors, this game has been around for about 40 years and people just keep on coming back for more.
— Greg Larson, owner of Larson's Toys and Games in Columbus, Ohio, told TDmonthly in 2012 and 2013 that Dutch Blitz was one of his top-two best-selling card games. 12/9/2004

The popular Wizard Card Game is available in this Deluxe version. Not only does it come with a 60-card Wizard deck, but it also includes six individual bid indicator wheels, a core pad and an instruction booklet. The game is designed to be played by three to six players.
— "Wizard has taken off. It really grew in the last few years. Battelle is a local science company near us, and the engineers there just love playing Wizard," said Frances Finfrock, owner of Aunt Franny's Toys in Richland, Wash.
— Three of 32 retailers who spoke to TDmonthly in summer 2007 cited Wizard as the most popular card game with their customers.
— "No other card game combines such ease of learning with such opportunity for skillful play. In fact, the Wizard Card Game it is the only game that a player can consistently win regardless of the cards dealt by switching from offensive to defensive play," said Stuart R. Kaplan, chairman of U.S. Games Systems Inc. 8/9/2007 (MSRP: $12.00; Age: 10 and Up)

Magic: The Gathering Card Game – Conflux Booster Pack by WIZARDS OF THE COAST 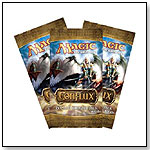 The five shards of Alara meet conflict in Conflux, where Bant Knights battle Naya Behemoths and displaced vampires add to the havoc. Conflux features 145 expansion cards and is available in intro and fat packs as well as boosters.
—    In late summer 2009, three of 38 retailers named Magic as their best-selling card game. Fifteen of the top 25 card games at Toy City in Keene, N.H., are Magic units, Owner Steve Levy told TDmonthly in August 2009, at which time his store had sold 850 Conflux boosters for the year.
—    Mike Lane, manager of Hobbytown in Cumming, Ga., told TDmonthly in late summer 2009 that his store attracts up to 25 kids for Friday night Magic tournaments. He cited sales of about 50 packs of month of Magic: The Gathering cards. 9/8/2009 (Age: 13 and Up)

UNO has been a fun, entertaining game for years and travels well, keeping little ones engrossed for hours.
— As of 09/15/2011 this product had 4.7 out of 5 stars from 93 reviews on Amazon.com, and had no one star ratings. It was ranked number 2 in the Card Games category.
— Nathan McKelvey, manager of Toy Castle, LLC in Jonesboro, Ar., told TDmonthly in a September 2011 survey that UNO is one of his top-three bestselling card games.
— UNO is published in 80 countries and has sold more than 150 million copies worldwide.  4/28/2005 (MSRP: $6.99; Age: 7 and Up)