From puppets to pianos, learn more about Top-10 best-selling infant & toddler toys, according to specialty retailers surveyed by TDmonthly, below.

*No manufacturer paid to be included in this article. All products listed were designated by editorial staff without regard to the company's relationship with TOYDIRECTORY.com/TDmonthly Magazine.

Animal rescue rangers to the rescue! With this rugged safari truck, two cheerful people are ready to zoom across the savannah to help their animal friends. The alligator, zebra, rhinoceros, elephant, giraffe, hippopotamus and lion fit into the truck's sides through die-cut slots, so this exciting toy is perfect for imaginative play and fine motor skills . . . and much more! Lift and remove the cargo door to unload the colorful animals, then count, sort and stack the solid-wood pieces before loading the truck and securing the door in its track. One male and one female ranger fit in the cab of the truck, or come out to tend to the animals on the preserve. Play ideas are included to reinforce basic skills and inspire creative play. 1/8/2013 (MSRP: $19.99; Age: 2 and Up)

Monkey in a Barrel by FOLKMANIS INC.

What’s more fun than a barrel of monkeys? Well, a MONKEY IN BARREL puppet of course. When you pull the monkey down into the soft microfiber barrel, the barrel lid closes. Guess what kind of monkey business is going on in there or pop the monkey out for a playful surprise. Launch date: January 2013.
— In an April 2013 survey Mary Porter Green, owner of Curiosity Zone in Ashburn, Va., told TDmonthly that Folkmanis puppets are a best-selling toy for infants/toddlers.
— In a June 2013 survey, six out of 11 retailers told TDmonthly that Folkmanis was their best-selling brand of plush or puppets. 12/13/2012 (MSRP: $23.99)

When children press a key on the piano, they not only hear a sound, they see stars pop up! The clear arch guides the popped stars onto a different pipe so when another note is played, they’ll pop some more! Adults can remove the arch to allow the stars to land on the floor, encouraging children to crawl after them. Pop! Pop! Piano measures 9" x 11" x 5.34" with clear arch attached. For ages 12 months and up.
— Dean Smith, owner of JaZams in Princeton, N.J., told TDmonthly in a January 2015 survey that Pop Pop Piano is their store's best-selling musical toy. They sell around 10 each month.
— Dean Smith, owner of JaZams Toys in Princeton, N.J., told TDmonthly in an April 2015 survey that the Pop-Pop Piano is their store's best-selling infant & toddler toy. They sell around 12 each month.
7/11/2013

Recycling has never been so much fun as with this friction-powered recycling truck with tip and release action. Children can use Fred’s bucket to tip waste into the truck or sort the three recycling bins and flip them into the rear. There’s also a powerful friction motor with realistic engine sounds, an automatic waste crusher, a boy and girl recycling team, and a sturdy carry handle. 12/14/2006 (MSRP: $49.99; Age: 2 to 5) 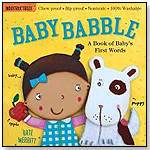 Indestructibles are the books built for the way babies read. They are 100 percent baby-proof, chew-proof, rip-proof, and drool-proof. Printed on a unique nontoxic, paperlike material that holds up to anything babies can throw at it—gumming, spilling, dragging across the floor— Indestructibles are the little books that could. They’re indestructible. And if they get dirty, just throw them in the washing machine or dishwasher. Baby Babble is a first vocabulary book, featuring baby at the table: spoon, banana, cheese. Baby at play: blocks, teddy bear. Inside baby’s house: lamp, socks, crib. Outside baby’s window: cloud!
— Dan Marshall, co-owner of Peapods Natural Toys & Baby Care in St. Paul, Minn., told TDmonthly in a December 2013 survey that this is one of their best-selling books. 12/27/2013

Pewi is an innovative walker/ride-on for the toddler market. Designed for children as young as nine months old, and as a child grows with the Pewi, it transitions into a foot to floor ride-on. With specially designed caster wheels, the Pewi ensures a quiet smooth ride that is suitable for indoor and outdoor play. As a ride-on a child can easily move the Pewi in any direction. The Pewi is designed to help develop early stage balance and motor skills. For ages 9-24 months. Available in 3 colors – Red, Pink and Blue.
— Michael Ziegenhagen, owner of Playmatters in Avon, Ohio, told TDmonthly in a March 2014 survey that the Pewi was a best-selling outdoor toy. 9/15/2010 (Age: 1 to 2) 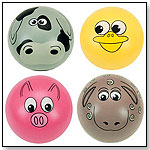 The Gertie Ball now has a little barnyard twist to it. Designed to fit into the smallest of hands, yet consisting of the same unique materials that have made the Gertie ball famous, Baby Gerties are sure to provide joy and fun for the littlest among us. They feature smiling farm-animal designs, which include a cow, sheep, pig and duck.
— "The kind of ball is important. [We] have Gertie balls," was a comment about outdoor best-sellers provided by Donna Dobkin, owner of Leapin' Lizards Toy Company in Bend, Ore.
— "We like...Gertie balls," said Frances Finfrock, owner of Aunt Franny's Toys in Richland, Wash.
— Four of 18 retailers told TDmonthly that Gertie Balls remain hot-sellers in their stores. 3/13/2007 (MSRP: $4.00) 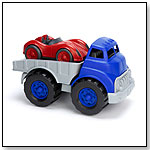 Green Toys' Flatbed Truck and Race Car lets kids ages one and up enjoy two cars, either apart for racing or stacked together for hauling. These eco-conscious vehicles are made in the USA from 100 percent recycled plastic milk containers. The recycled products in this set help to save energy and reduce greenhouse gas emissions. Parents can feel confident giving this toy to their little one as it contains no BPA, PVC, phthalates, or external coatings.
— As of 10/26/2012 this product had 4.6 out of 5 stars from 51 reviews on Amazon.com. Pros: Durable; BPA and pthalate free; made in the USA. Cons: Several users mentioned that the wheels had difficulty turning. 10/26/2012 (MSRP: $32.99; Age: 1 to 10)