When TDmonthly Magazine surveyed retailers in a May 2014 survey, we discovered that LEGO was a best-seller for almost half of the toy stores we spoke with. LEGO Friends, Star Wars, and Superheroes were all mentioned, along with toys from Playmobil, Magformers and more. Check out all of the top-10 most-wanted construction toys below, then decide if any are right for your store. 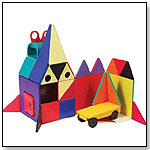 This 48-piece set includes solid colored pieces, along with pieces with holes, curved pieces, a magnetic door and a wheeled piece. Magna-Tiles DX contains 12 small squares, four large squares, six isosceles triangles, 10 right triangles, 11 equilateral triangles, a wheeled piece, and arch and three special shapes. An idea guide is included.
— In late summer 2010, five percent of 43 specialty retailers told TDmonthly Magna-Tiles are an overall best-selling product.
— In late Spring 2011, 25% of retailers mentioned Magna-Tiles as a best-selling construction toy.
— As of 05/12/2011, this product had 5 out of 5 stars from 23 reviews on Amazon.com.
— In a Summer 2012 survey, Diana Nelson, owner of Kazoo & Company in Denver, Col., told TDmonthly that Magnatiles were their overall best-selling toy. 9/22/2010 (MSRP: $64.50)

An 8 in 1 land themed construction kit with Laser Pegs, construction parts, and a Triangle Power Base.
— In a May 2013 survey about construction toys Joe Berardoni Jr, owner of Pun's Toys in Bryn Mawr, Pa. told TDmonthly that "Here at Pun’s, we continue to sell Laser Pegs very well, mostly the Land, Sea and Air series. Their new design which makes them compatible with other construction bricks has helped boost sales over last year at this time."
— In a July 2013 survey Joe Berardoni Jr., owner of Pun's Toy Shop in Bryn Mawr, Pa., told TDmonthly that Laser Pegs is one of the store's best-selling electronic or battery-operated toys.
— Karen Laroche, manager of Kid's Ketch in Lews, Del., told TDmonthly in a Fall 2013 survey that Laser Pegs are one of her store's overall best-selling toys. 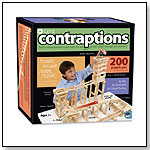 This kit gives some structure to free-form building with planks, including an idea book with instructions for building ball-track structures, ramps, funnels and more. It allows for scientific experimentation as kids test rolling the two included lightweight balls to see if they move as anticipated.
— "A new concept kit will help kids build bigger and better — simple, open-ended and smart," said John MacDougall, owner of Golden Apple Learning Store in Pleasanton, Calif., at Toy Fair 2010.
— It was also a top-two favorite at ASTRA's Share the Fair event during Toy Fair 2010.
— In an April 2012 survey, Elmer Carranza, manager of Doodlehopper 4 Kids in Springfield, Va., told TDmonthly that KEVA blocks are their best selling construction toy. (

GoldieBlox and the Spinning Machine by GOLDIEBLOX INC

This is the first book & construction toy in the GoldieBlox series. Meet Goldie, her beloved dog, Nacho, Benjamin Cranklin (the cat with an attitude), Katinka (the dolphin ballerina), Phil (the sloth) and Flavio (the bear from Brazil). Help Goldie figure out how to build a belt drive to spin everybody. Includes: (1) storybook, (1) pegboard, (5) wheels, (10) axles, (5) blocks, (1) crank, (1) ribbon, (5) washers. Launch date: April 2013.
— In a May 2014 survey Suzi McMullen, manager of Doodlehopper 4 Kids in Falls Church, Va., told TDmonthly that Goldieblox was a best-selling construction toy in their store. "When we had it, we sold out all 24," she said.
— In a September 2014 survey, LyndaBlankenship from Smart Toys & Books in Knoxville, Tenn., told TDmonthly that Goldie Blox are one of the store's best-selling science & nature toys. 12/10/2012 (MSRP: $29.99; Age: 5 to 9)

108 magnets included in 30 Magformers. Twelve triangles and eighteen squares. Two different shapes - triangles, and squares. Blue, orange, red, purple, green and blue colored pieces. Includes 30 Magformers and detailed instruction guide.
— Diana Nelson, owner of Kazoo Toys in Denver, Colo., told TDmonthly in a Fall 2012 survey that Magformers are one of her top-2 overall best selling toys.
— Gary Green, owner of Toy Box of Asheville Inc in Asheville, N.C., told TDmonthly in a May 2014 survey that Magformers were the best-selling construction toy in the store. 7/20/2012 (MSRP: $104.00; Age: 6 and Up)

With the Playmobil Soldiers Fort with Dungeon kids can help the soldiers defend their fort, which includes a prison drop door, dungeon, and vault. Located on the door to the vault is a magic coin that can be used on the Pirate Adventure Island. Set also includes three figures, working cannon, and other accessories. Dimensions: 20.1 x 18.9 x 9.3 inches (L x W x H). Recommended for ages four to ten.
— Sue Hottel, manager of No Kidding (aka Sand Castle Toys Inc) in Mattapoisett, Mass., told TDmonthly in a May 2014 survey that Playmobil was one of the top-2 best-selling construction toys in the store. 11/9/2012 (MSRP: $68.00; Age: 4 and Up) 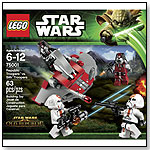 The Republic troopers are under attack! Fire their blasters as you battle the red and black Sith troopers and their hover speeder with dual flick missiles. Recreate epic battle scenes from the Knights of the Old Republic video game in your own living room. Collect the never-before-featured Republic trooper helmet. Includes 4 minifigures with assorted weapons: 2 Republic troopers and 2 Sith troopers.
— In a May 2014 survey Andrea from Hardware Center Toys in Paoli, Pa., told TDmonthly that LEGO Star Wars sets was the store's best-selling construction toys. 12/18/2012 (MSRP: $12.99; Age: 6 to 12) 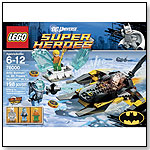 Mr. Freeze has trapped Aquaman in a block of ice and only BatmanTM can release him! Speed to the rescue in the powerful Batboat with exhaust flames, deploy the missiles and release the bombs to bust that block of ice. It's time to turn the heat up on Mr. Freeze! Includes 3 minifigures: white Arctic BatmanTM, Mr. Freeze and Aquaman, all with assorted weapons.
— Dalene Lockhart, owner of Toy Town in Casper, Wyo., told TDmonthly in a May 2014 survey that LEGO Superheroes and LEGO Friends were the best-selling construction toys in her store. 12/18/2012 (MSRP: $44.95; Age: 6 to 12) 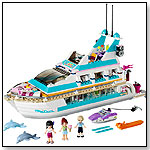 Set sail for fancy fun in the Dolphin Cruiser, a 2-story yacht with a waterslide that splits in half for playing inside with 3 mini-dolls. 612 pieces.
— Dalene Lockhart, owner of Toy Town in Casper, Wyo., told TDmonthly in a May 2014 survey that LEGO Superheroes and LEGO Friends were the best-selling construction toys in her store.
— In a November 2014 survey, two retailers told TDmonthly that LEGO was a best-selling line of toys. 9/26/2013 (MSRP: $69.99; Age: 7 to 12)