Kids Go Behind the Scenes at Toy Trade Show

For the first time in its 18-year history, ToyDirectory.com and TDmonthly Magazine used Kid Reporters to cover a major American toy trade show – the ASTRA Marketplace 2014 in Phoenix, Arizona. We ventured into this unknown territory to get insights into new toys from a child's perspective ... and to have really cute videos for our readers and clients! 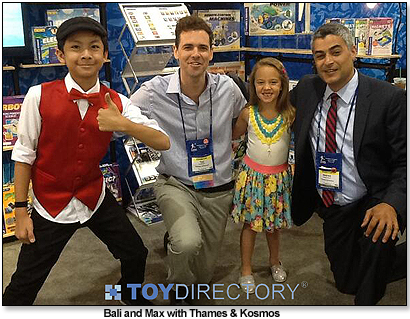 Shepherded by TDmonthly's videographer, Terry Larson, two teams of Kid Reporters covered some of the major booths at the show. 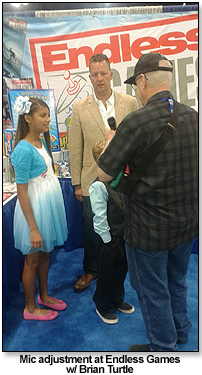 The Stories Behind the Toys

TDmonthly's Morning Kid Reporter, 12-year-old Max Mendoza was especially adept at extracting from vendors the real reason their toy was invented. Snake Oil by Out of the Box Publications, for instance, was originally pitched as a game to teach marketing skills to kids. OOB "funned" up the original idea by creating a game where you sell dubious products to prospectors and other clients who want a magic fix to reach their goals. 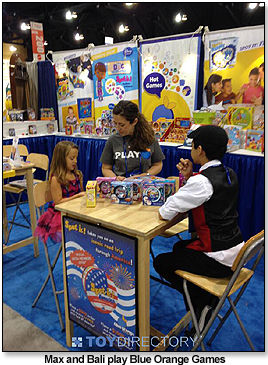 TDmonthly's Evening (well, after lunch) Reporter, 12-year-old Alicia Laguna, found out that the inventor of the Grandpa Beck's card game Cover Your Assets had based all of the characters on members of his own family! 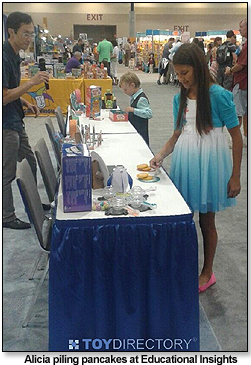 "I liked being a Kid Reporter because I got to meet people I didn't know," Alicia said. "Their toys were really cool. I can't believe they made them!"

Another of her favorite items was the Dancing Water Speakers from Leading Edge Novelties. 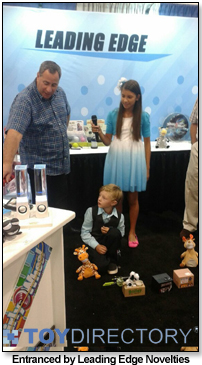 Did meeting inventors inspire Alicia to become a toy inventor herself? "Yes!" she said enthusiastically. How about Max? "Well, only if I'm not acting," he allowed.

The Stories Behind the Kids

So who are TDmonthly's Kid Reporters? Their stories are almost as surprising as the cool new toys at ASTRA.

Max is an actor, who most recently appeared as Smee in "Peter Pan Jr." at Peoria Theaterworks. His list of credits includes 16 theatrical roles, 16 film roles – including a small role in the upcoming indy feature "Hope Rises" by the Bring Me Hope Foundation — and work in a web series. 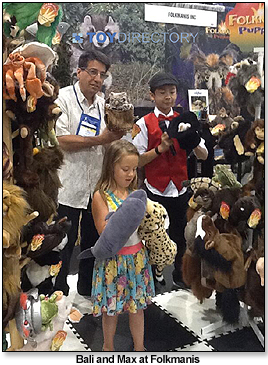 Alicia, too, is a veteran thespian. She appears in a commercial for Fulton Homes that's currently airing and has a supporting role in the upcoming indy feature "The Godchildren."

Max's Morning Co-Reporter, 6-year-old Bali Bare, might be giving her interview subjects some fierce competition in the near future: She's already invented a product, which her mom — slow-cooking blogger Jenn Bare — is helping her develop and promote (details are on hold for now! Shh!) And – as you might guess from her big personality – she's also an actress and a model. 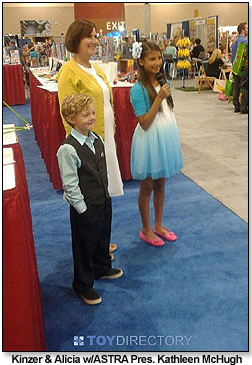 What the Kids Thought

The kids all agreed that going to the ASTRA Marketplace was "cool," "awesome" and "a dream!"

Kinzer's favorite part was that, "I got free toys because I was dressed in a suit!" He, like his partner, loved the Leading Edge water speakers. His other favorite toy was the Squinkies. 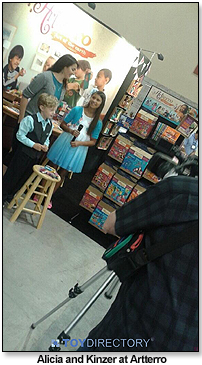 Max, with his inquisitive mind, favored science-based toys like Modular Robotics. This new product had TDmonthly Retailer Reporter Kate Tanner of Kidstop Toys so in awe that she forgot to take photos – she was too busy ordering. She called it "the new LEGO." Max also loved the Cubelets and Magformers. 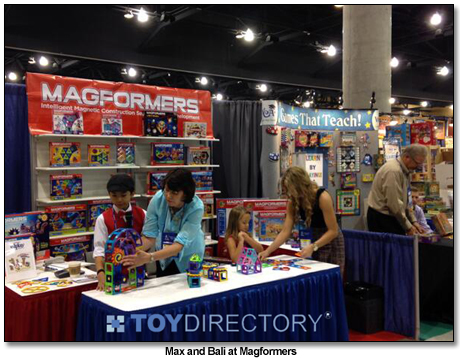 Expressing his more active side, Max was taken with all of the different scooters and bikes.

"The Giant Flying Turtle was fun to ride," he said. "I really liked the BERG pedal cars."

Bali's favorite thing of all were the Safari Ltd. Minis that she got to keep. She also loved Science Wiz's Cool Circuits. And though Max beat her out for keeping a sample (you'll need to see the video for that!), she's excited because Dr. Penny gave her a Grow Your Own Crystal kit. Bali's mom says they'll probably buy the Cool Circuits, too!

Bali also loved the stuffed animals and the Unicorn from Douglas Cuddle Company and puppets from Folkmanis: "All of them!" she said. 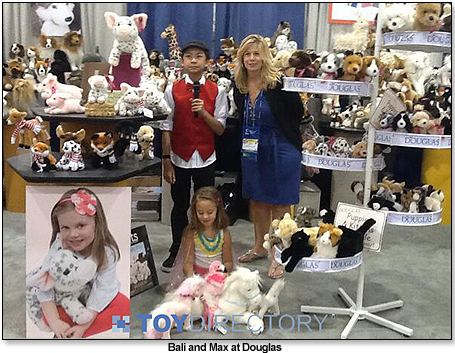 Her favorite game was Snake Oil from Out of the Box Publishing. Mom Jenn commented, "My husband is in sales so we really appreciated that it's about selling ideas."

Finally you may notice that Bali starts the day in a glittery costume and ends in a cute skirt and shirt. Why the costume change? "I was freezing!" she explained. 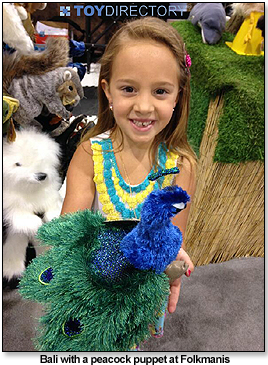 None of the Kid Reporters had ever been to a toy trade show before, of course, and probably will never go again. While at ASTRA, they got to live out a kids' dream, playing with every toy under the sun, from digging amethysts at Geocentral (which also has diggable dino poop) to transforming their hands into whales and turtles at Folkmanis. 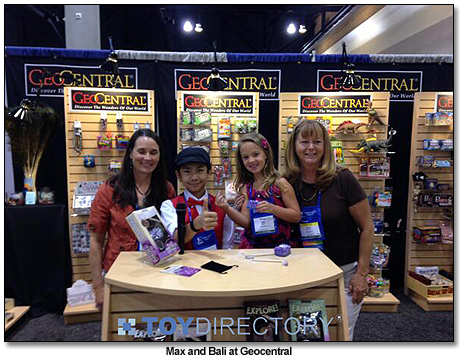 You'll soon be able to see videos of Max, Bali, Alicia and Kinzer at work (and play). In the meantime, check out some of the toys they got to scrutinize:

You’ll enjoy more colorful, magical, and powerful magnets in this larger version of the basic set. The 62 Piece Set contains 30 squares, 20 triangles, and adds building diversity with 12 pentagons. A wonderful set for the novice builder who’s ready to leap into creativity. This set is truly easy and simple to use right out of the box. Only the best materials are used, High Quality ABS Plastic and 1/3" rare-earth NEODYMIUM magnet on side of the shape. 5/28/2014 (MSRP: $99.99)

Part of a line of ScienceWiz Thinking Games, this puzzle game created by Harry L. Nelson and Hiroshi Yamamoto provides 40 challenges at different skill levels. Players put a puzzle card down and solve the puzzle by making sure all the pieces are looped together, at which time the board will light up with the solution.

Your little animal lover will have hours of fun with these lovable Good Luck Mini® Chimps! Minis are tiny hand-painted replicas. These soft figures are professionally sculpted and feature the realistic colors and lively detail you expect in the larger replicas from Safari Ltd®. People use Good Luck Minis® for wedding favors, classroom prizes, party decorations, giveaways, and imaginative play. This set includes 192 Chimp Baby replicas packaged in a polybag.

The new Game where the goal is to be the first millionaire! Stack pairs of assets, to cover your valuables before they are stolen by other players! Defend your assets with like cards in your hand or Gold or Silver Wild Cards! Easy to learn in just minutes, with layers of strategy for years of fun! This will be a your new Family Favorite! Loved by all ages. Kids, Parents, and Grandparents can all enjoy a great time together. Even dedicated, competitive, gamers get a kick out of the quick action, and the drama. Enjoy the emotional response as the value of your Assets increase each time they are stolen. Steal them back to gain even more value. Before they are stolen again, cover them with more Assets to protect them. Watch out though, if your new top set is stolen the one below it is in jeopardy again. Keep building up your assets till you become the first millionaire.

This American-made, child-powered ride-on toy features an injection-molded polyethylene seat. Kids simply put their feet on the handlebars and swing the handlebars side to side with their hands to generate movement. The Flying Turtle, which comes pre-assembled, may be used both indoors and out, and holds up to 150 lbs.
— Deborah Smith, owner of Toys That Teach in Richmond, Va., listed the Flying Turtle as her best-selling ride-on toy in a March 2009 survey. “In spring and summer, [we sell] at least a dozen per month,” she said.
— Five percent of 60 retailers told TDmonthly in spring 2009 that Mason Corporation's Flying Turtle is a best seller in their stores.
— Three of 37 retailers named the Flying Turtle when discussing best-selling ride-on toys in spring 2010. Creative Kids Inc. in Columbia, S.C., sells about three dozen annually, Owner Melodie Ingwersen told TDmonthly in March 2010.

The new Ostrich puppet is a rare bird indeed. A beautiful specimen with feathery soft plush and lustrous long eyelashes, this lovely long-legged creature holds its head up high when you insert your hand up the neck and into the beak. Two handed wing movement allows for pecking, strutting and flapping fun! 23-inches tall. MSRP $49.99. 2/10/2014 (MSRP: $49.99)

These deluxe kits are an amazing way to make learning fun!
Each kit contains a sculpted and painted dig block, digging tool, dusting brush, magnifier, keepsake bag and educational booklet.  Each booklet has interesting information about the subject and fun activities.
Assortment includes 9 kits: 2 of the Amethyst, Gemstone and Dinosaur Poop Fossil kits and 1 each of the Meteorite, Real Sea Life Fossils and Dinosaur kits.

This plush unicorn is 27" long with tail (69 cm). Douglas Toys makes beautiful, soft, cuddly stuffed animals and infant plush with a distinctive expression or gesture that speaks quality and value unlike any other plush animal. 6/12/2014 (MSRP: $44.99; Age: 2 and Up)

Connect these speakers to computers, iPhones, iPods, tablets, Android, game players & more. Multi-colored jets of water dance to the volume and beat of the music. That, added to the 4 multicolored LEDs, creates an incredible light and water show. The speakers stand 9" tall and are compatible with any audio device that has a 3.5mm audio jack connection. They are lightweight and portable. All connection cords are included.
— In a August 2014 survey, Stan Giliberto, owner of Over the Rainbow Toys in Glastonbury, Conn., told TDmonthly that this is one of their best-selling toys. "It's good for older kids who are starting to age out of toy stores," he explained.
— In a September 2014 survey, Beth Snyder, manager of Growing Tree Toys in State College, Pa., told TDmonthly that these speakers are one of the store's best-selling novelty items. 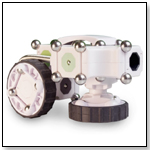 Build a distance-sensing robot motorcycle. The Basic Builder is the best way to start playing with robots. This kit includes two spin modules so you can create simple robot critters that scoot and drive. Control your creation with an infrared distance sensor! 3/12/2014 (MSRP: $149.95) 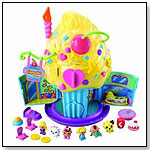 The Squinkies series of toys are soft, squeezy characters that can be held in the palm of a child's hand. Each toy comes inside its own bubble from which it can be removed. Put the Squinkie in the cupcake, insert a "coin," and the Squinkie comes tumbling out. The Cupcake can be opened to reveal a bakeshop playset. 2/18/2011 (MSRP: $19.99; Age: 3 and Up) 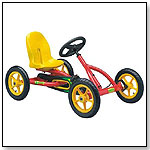 A rugged, four-wheel pedal kart with air-filled pneumatic tires and a wide wheelbase. Riders can pedal forward, backward, and brake without taking their feet off the pedals. Thanks to an adjustable seat, kids can continue to ride as they grow older. 6/22/2012 (MSRP: $319.00; Age: 3 to 8)