Shop Talk: Our Favorite Toys of All Time 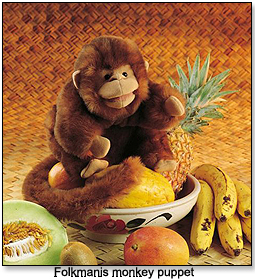 Thousands of new toys are released every year, but now and then one comes along that remains a favorite.

TDmonthly interviewed retailers about their all-time favorite toys. Some are still selling successfully, while others have gone the way of the Tamagotchi, but you can read about all of them below.

What's your favorite product you've ever sold in your store?

The Haba Ball Track Set is still our favorite toy. It's one of the most creative building toys that there is. Kids and adults are totally fascinated by it. It's one of those building toys that promotes creativity and it's a great engineering toy and science toy. It teaches so much. It teaches reverse engineering. It's the classic building toy, and I love it. We begged Haba to send us a display from Germany, and they finally did it. It's the focal point in our store, and kids run to it.
— Dean Smith, owner of Jazam Toys in Princeton, N.J.

The games Blokus and Rush Hour – they sell themselves because parents know the educational and play value – and they are truly wonderful games.  We have both at my house and play them all the time.
— Mary Porter Green, owner of Curiostiy Zone in Ashburn, Va.

My favorite thing this year has been the Pogo Jumper - a foam pogo stick for kids. It has foam and elastic and handlbars, and squeakers, so there isn't the danger that you would feel from a real pogo stick, but you still have the fun of the jumping action.
— Lisa Shinn, manager and buyer for Dancing Bear Toys in Frederick, Md.

I was a big fan of the Koosh line. I used to put in a 3 to 4,000 dollar order for that stuff. There were 10 to 12 skus that sold all day long. Particularly a sponge art set that was our best-selling art item. Then the company got incorporated into Hasbro and disappeared. I also love Carrera car sets and get really excited about selling them. Doesn't happen much, since it's pretty high end.
— Richard Gibson, owner of Learning Express of Newton in Newton, Mass.

My favorite is the Traxxas line. They're literally keeping my business open. They are radio controlled, waterproof, fully repairable, and have excellent customer service.
— Gregory Faith, owner of Inside Out Hobbies in Nashua, N.H.

My favorite was the Folkmanis monkey puppet. It was fun, it felt good, it was adorable, and my excitement for it was contagious.
— Teresa Derry, owner of Annie's Toy Chest in Cocoa, Fla.

Our favorite is the Butterfly Garden by Insect Lore. It's an activity for the family, and it's fun to watch.
— Deborah Thompson, owner of Shenanigans Toys in Peachtree City, Ga.

Wooden trains from Bri-O or Thomas are great. I just think when they're younger, this toy is a springboard for storytelling. It also helps with fine motor skills. When they get older, it becomes a full-blown building tool. I love the way it grows with them over time.
— Tye Steinbach from Thinker Toys in Portland, Ore.

We had a lot of fun selling BC Erasers. One of our strongest amounts of revenue was generated in that small footprint. Also, Kendama is "King of the castle" right now. We've probably sold 5,000 pieces this year.
— Casey Sartain, co-owner of Tutoring Toy in Salt Lake City, Utah

While winding their way down the wooden track, the colored balls shake hands with wooden goblins, making little bells ring and clatter over the chatter track. It's nonstop rolling fun. It measures: L 47 x W 19 x H approx. 40 cm. It includes 2 balls of one color and 2 balls of two colors. The size of the balls (4.6 cm) makes this game suitable for toddlers. 11/7/2005 (MSRP: $90.00; Age: 2 and Up) 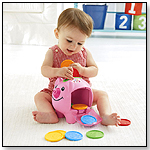 Count on plenty of learning fun and musical rewards with this delightful friend. Baby will learn about counting, colors, animals and sizes with songs, music, speech, and activities that respond to baby. There are 10 colorful coins to drop into the slot while counting along, comparing big and small, and discovering mommy and baby animals. Press the piggy’s snout for musical responses, open the door for put-and-take play, and enjoy fun sing-along songs. Make learning more fun with the Laugh & Learn collection of toys. With rich music, sing-along songs, and lots of activities, they combine early academics and everyday experiences—for the way kids really learn! Requires 3 "AAA" alkaline batteries (included). 5/28/2015 (MSRP: $24.99; Age: 0 to 3)

Jumping fun for everyone! Made from soft, durable foam and great for indoor and outdoor play This lovable foam pogo jumper squeaks with every hop! The bungee stretches to accommodate children of all heights and can support up to 250 pounds. Kids and adults alike will have a hopping good time on the Hop & Squeak Pogo Jumper. (From ages 3 to 100 depending on the functionality of your bones at that age. 5/28/2015 (Age: 3 to 10)

The Traxxas Stampede XL-5 Ready-to-Run was named the “best electric monster truck for 2006.” It offers a Titan 12-turn 550 motor that brings it to speeds of over 30 mph. It is a rugged, high-performance truck.
— This ready-to-fly helicopter was on the top 10 best-sellers' list for the HobbyTown USA franchise at the beginning of 2009, according to Director of Media Buying Mary Friesen. 1/29/2009 (MSRP: $179.95; Age: All Ages)

A classic starter set for the 2 year + child with all wooden details. Take the classic inspired engine out on an adventure along the tracks. Stop by at the all wooden station and continue along the tracks passing by trees and a crossing bridge. Lots of fun for the youngest drivers. Launch date: August 2012. 10/5/2012 (MSRP: $49.99; Age: 2 and Up) 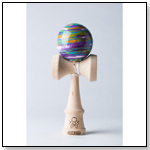 Marbles are back for a limited time! This tama features our classic marble paint style with a purple, yellow, and seafoam combo. Coated with our high-gloss Pro Clear. Every Sweets Kendama comes with an extra string, bead, instructional book and stickers.