Hot for the Holidays

The Big Box stores may be stocking up on Bratz, Star Wars and electronic gizmos, but specialty retailers have their own set of hot items to make this holiday season bright. According to TDmonthly Magazine’s survey, retailers across the land are predicting that this Christmas will be more nice than naughty, and that traditional toys will be their best sellers. So, if you’re looking to do some last-minute ordering, here are the toys that we think will do well (and don’t forget to check in next month to see an in-depth breakdown by some of the most popular holiday categories): 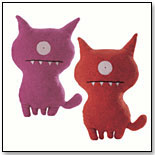 Developed by artists David Horvath and Sun Min-Kim, this irresistible 12” to 14” tall hot pink plush creature looks like a Cyclops caught in a nuclear meltdown. The “dog” has four feet and a tail, all in a row. Made of a soft fabric akin to the inside of a fleece sweatshirt, the doll is easy to squeeze and hard to put down. Uglydoll describes the character as “the ultimate pet” because “what he really likes to do is stand on his tail and live out his big dream … to be just like you!!!” Whether full-size, half-size, swinging from a keychain, or decking a t-shirt, the Ugly Dolls are the coolest hot toy for kids of all ages.
— “They’re so popular, and across such a broad age range!” enthused Elaine Hackney, owner of J.P. Boing’s Toy Shoppe in Jamaica Plain, Mass. “They´re great. When they first came out several years ago, I didn’t think so, but I was proven wrong.”
— A TDmonthly Magazine reporter spotted a tourist at a Los Angeles airport carting off a whole bagful of the Uglies. All the retailers we called said they haven’t slowed down a bit.
— Uglydolls have been seen on CNN and The Today Show. The t-shirt is featured in the Sony picture “Zathura,” out this month. (

Formerly known as the Sylvanian Family, Calico Critters have been around at least as long as Mom, and now her daughters are collecting them, too. Pictured here is the brand new Calico Critter Wedding Set, available for a limited time only. It comes with more than 20 accessories, including an organ and pews, to make a special day complete. Calico fans can dress their critters in the bride´s gown and groomsman´s tuxedo, and invite all their critter friends to attend the grand event. The case measures 11" x 7" x 9". Critters and batteries are not included.
— “Omigod! They’re unbelievable! They’re like a top, top seller,” gushed Ricki Block of Ariel’s Child in New Windsor, New York.
— Terri’s Toy Box in Seattle has been doing “really, really well,” with Calico Critters, according to manager Meghan Block, and the same’s been true at countless other stores.
— Even boys play with the critters, said Susan Tice, product manager and public relations director for International Playthings Inc. 10/27/2005 (MSRP: $41.95)

These highly detailed figurines and accessories are hand-painted and historically accurate. Almost all Papo Figurines can stand on their own or ride any of the horses. "The concept of creative imaginative play continues to be something that retailers and parents are very pleased with," Larry Hotaling, president of Hotaling Imports, Papo´s U.S. distributor, told TDmonthly Magazine. "It´s something that´s [otherwise] lacking with today´s children ... Papo´s been very well received."
— Papo knights were very-good-to-great sellers in 90 percent of stores surveyed.
— “Papo knights are one of the best things we have right now,” said Richard Emery, owner of Toy Star in Easton, Pa., back in June 2005. As of the end of October 2005, retailers across the nation agreed that Papo knights were still one of their best items for boys.
— The popularity of Papo is growing strong," said Hotaling. "Children are very interested in our different categories, such as Medieval Knights Fantasy and Pirates. The brand name is becoming very well known. 8/15/2005 (MSRP: $3.98; Age: 3 to 12)

Kids can paint with sweeping gestures when they use this generous-sized easel. One side is a chalkboard, the other´s a dry-erase board. Load a piece of paper into the paper holder and kids can paint and scribble to their heart’s content. Each side of the easel features a colorful tray that can hold paints, cups, chalk, erasers, clips and more. “Our Deluxe Easel has become one of our best-selling items because of its great value, high-quality construction and versatility,” said Rick Davis, part of the marketing team at Melissa & Doug. It has two adjustable boards that allow children of all sizes to enjoy painting and creating, and the easy-to-clean trays are removable in seconds.”
— This product has been making the TDmonthly Best-sellers lists since 2005.
—  As of 1.06.2011 this product had 4.5 out of 5 stars from 647 reviews on Amazon.com and was No. 18 on the top 100 bestselling toys and games. Pros: Double Sided; easy to clean. Cons: Supplies must be purchased separately.
— "The Melissa & Doug Easel, hands-down, beats everything in terms of dollars. It's well-made and good value," was the praise given by David Campbell, owner of Amazing Toys in Great Falls, Mont.
— “Our easel, from Melissa & Doug, just blows out of here,” said Nishan Shepard, owner of Rockridge Kids in Oakland, Calif., in early 2010.
— Seven of 48 retailers named the easel as their top-selling art item in January 2010, reporting average sales of three per month.
— This easel has been a consistent best seller for Jillie Beans Toys & More of Westminster, Colo., since the store opened in 2006. (April 2010) ( 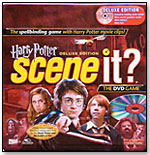 Test your knowledge of one of the world´s most famous wizards with movie clips, puzzlers and questions based on the first three Harry Potter movies, including bonus content from "Harry Potter and the Goblet of Fire." How much do you really know about Quidditch, Transfiguration or the Dark Arts? You'll find out as you race your friends around the game board. (

Sixty rugged plastic pieces snap together easily to form endless combinations of poseable creatures. In this set, kids can make a cat, fruit bat, lantern fish, desert lizard, snake and firefly or morph them to make all sorts of fantasy creatures. The heads have hinged jaws, and select pieces, such as the cat’s eyes, glow in the dark. All Morphs sets are interchangeable. The Morphs are also available in jungle, sea, pet, runners, fliers and dinos sets.
— “This is a great one,” said Doris Jelliff, bookkeeper for Dinosaur Hill in New York City. “It was a big hit when they first came out and now they’ve come out with new glow-in-the-dark ones.”
— “This is one of the hot sellers,” said Ricki Block of Ariel’s Child in New Windsor, N.Y. “All of the sets are going to be popular.”
— “We started with 60 stores in 2004, but the word got around so now we’re in 700,” said River Dolphin partner Mark McFarland. “The demand has been high; we’ve gotten slammed with orders. We got in 25,000 units today and they are almost entirely sold.” READ MOM REVIEW (