Scaredy Squirrel at the Beach by KIDS CAN PRESS 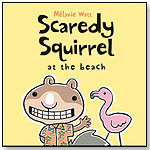 Scaredy’s idea of the beach consists of a faux set-up under his nut tree, with an inflatable pool, fake beach scenery and a plastic flamingo. But a visit to the real beach is tempting. Will his No. 65 sunscreen offer enough protection? (

Kids will learn how to cook simple, yet delicious Mexican dishes, while learning about the vibrant Mexican culture. Each book is packaged in a tortilla bag with an oven mitt. "Ingredients and utensils are translated in the intro so kid chefs get to learn Spanish," Handstand Kids Founder Yvette Garfield told TDmonthly. Awards: TDmonthly Top Toy 2008. Launch date: May 5, 2008.

This 40-page science book and materials kit includes eight major activities that transform the study of central concepts of molecular biology into child's play. Kids can extract DNA from a fruit, probe and spool real DNA, build a double helix model, solve a chromosome puzzle (Is it a boy or a girl?) and play a gene construction game. A more advanced version is available for appropriate markets. Awards: TDmonthly Top Toy 2008. Launch date: 2008.

Where to Buy: Kazoo Toys (

Rue, The Monster of Insecurity by THE MONSTERS IN MY HEAD LLC 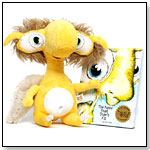 Rue, the irresistible Monster of Insecurity hides behind flowers because he thinks he's different. He doesn’t realize that his unusual features make him interesting.  He thinks that his nose just doesn't "fit" with his shaggy hair, cheese curl ears and fluffy wings. How silly! What he needs is a little encouragement. Won't you tell him he is perfect just the way he is? Rue is a part of the The WorryWoo Monsters series that tackles complicated feelings and transforms them into quirky, loveable characters. Rue and "The Nose That Didn't Fit" won a 2009 Excellent Product Award from iParenting Media and the 2009 Toy of the Year Award (category: storybook and plush) from Creative Child Magazine, as well as a TDmonthly Top Toy Award 2009.

Where to Buy: My Toy Smart (