When TDmonthly interviewed retailers in September 2011 to find out about the current bestsellers in the Science & Nature category, the most mentioned products were Elenco's Snap Circuits, and various products from Scientific Explorer. The educational toys below encourage kids to exercise their minds while having fun - from watching caterpillars grow into butterflies in Insect Lore's Butterfly Garden, to creating their own robot with the Tin Can Robot from Toysmith.

See all of the Top-10 Most-Wanted Science & Nature toys below.

This kit includes a 40 page science book and enough contents to participate in 18 activities. All materials are included except for a D-cell battery. The kit has step-by-step, highly visual instructions and child appropriate materials designed for young children to work independently.
— John Blair, owner of Science Safari in Cary, N.C., told TDmonthly in a September 2011 survey that they sell 6-8 of these kits each month. "We really like them and we push them,” he said.  8/21/2008 (MSRP: $19.95; Age: 5 to 10)

Including six different snap-together models, this kit provides children with examples of many uses for solar panel technology. A car, robot dog, hover boat, and other models spring to life when their solar panels are hit by direct sunlight, or the illumination of a 50 watt halogen bulb. Models are compact and light weight, making them easy to take outside and watch as the sun's rays are converted into clean electrical energy.
— Kate Tanner, owner of Kidstop Toys, informed TDmonthly that this was one of her favorite products at Toy Fair 2010.
— Lisa LeStrange, owner of Lucky Duck Toys in Wayne, Pa., told TDmonthly that this solar kit is a bestselling science toy. It's "not expensive. We just got it and it's selling well. It's a good product — you shine a flashlight on it and it goes," she said. 2/19/2009 (MSRP: $19.95; Age: 7 and Up)

Volcanoes are one of the most awesome forces found in nature. They can shoot rocks and gases miles into the air and their lava flows can outrace a speeding car.  Now kids can try that at home.  In this kit, everything is included to create a volcanic blast.  Volcano really explodes and lava flows, and the kit includes cool science that explains how volcanoes form and why they explode.  Volcano erupts up to 10 times. Launch date: August 2010.
— In a September 2011 survey, three out of 13 retailers said products from Scientific Explorer were their bestselling science & nature toys. Joe Berardoni, owner of Pun's Toys in Brynn Mawr, Pa., told TDmonthly that "Scientific Explorer's line features colorful, good sized boxes and some great titles." 7/12/2011 (MSRP: $19.99; Age: 8 and Up)

Kids can make gobs of gum with this bubble gum factory. Create unique recipes by mixing and matching different flavors. Kit Includes citric acid packet, corn syrup, confectioner sugar, gum base, watermelon flavoring, blueberry flavoring, mint flavoring, 2 note cards, activity guide, and a plastic tin with lid.
— Andrea Scartozzi, from Hardware Toys in Paoli, Pa., told TDmonthly in a September 2011 survey that Bubble Gum Factory is their bestselling science toy.
— In a late Summer 2012 survey, Joe Berardoni Sr., owner of Pun's Toys in Bryn Mawr, Penn., told TDmonthly that "a certain few of the kits from Scientific Explorer, mostly any one that has to do with food," are their second-best selling Science & Nature item.
— Mary Porter Green, owner of Curiosity Zone in Ashburn, Va., told TDmonthly in a Fall 2012 survey that kits from Scientific Explorer are one of their top-2 bestselling educational products. They sell dozens each month. 9/19/2011 (MSRP: $19.99; Age: 8 to 12) 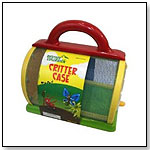 Mesh walls allow for close-up viewing of butterflies and insects. A sliding plastic door makes catching and releasing easy while avoiding pinched fingers, and a carrying handle makes it portable.
— With warmer weather approaching, these backyard exploration critter cases were on the top-10 best-seller list at My Club Tabby in Lake Charles, La., in spring of 2010. Owner Natalie Comeaux reported in March that the kits had been selling well for more than a month.
— June Hargrove, co-owner of Black Forest Books & Toys in Charlotte, N.C., told TDmonthly that they sell 24-30 of Toysmith's Critter collection each month. 3/25/2010 (MSRP: $15.00; Age: 5 and Up)