These travel toys and travel games will keep kids occupied during summer vacation.

By TDmonthly Staff
May 2012
Family vacations can be a blast — but getting there is another story entirely! Keep kids occupied and happy while traveling with these mass-market and specialty travel toys and games, both recently added and classic:

Artist on the Go by BEGINAGAIN

A complete art kit for families on the go. This natural cotton carry case with built in crayon holster, pencil holders and pockets is fully equipped with a 6"x9" recycled paper notepad, 10 soy crayons, 5 drawing stencils including a 6" ruler (metric and inches), 2 wood pencils, and plenty of storage! Perfect  for restaurants when waiting for your food, airports, and road trips. This 8"x10"carry case fits in a baby bag and has built in handles for the little ones to carry proudly. Made from Plants - primarily natural cotton, soy, paper. 4/11/2012 (MSRP: $25.00; Age: 3 and Up)

The Void is puzzling to comprehend because there’s a hole right in the middle of it. Consumers can literally put their finger right through the center of the Void. The object is to solve each side, much like one would a standard Rubik’s Cube, but that’s where the similarities end. The Void has different colors, rounded edges, and requires a different solution. Launch date: February 2012.
Awards: 2012 ASTRA Best Toys For Kids Nominee 3/19/2012 (MSRP: $14.95; Age: 8 and Up)

There’s no dice to roll in Patch’s new version of Farkle. In Farkle Flip™ The Quick-Grabbing, Risk-Taking Card Game™, Patch puts a new spin on the popular family game by turning it into a card game. Players flip cards over, hoping to make combinations to help them win using their own cards or another player’s cards. If a player draws a Farkle, they lose their points for that round. But they can score those Farkle cards later – definitely a new twist on Farkle. Launch date: 2012. 1/4/2012

Spot It! On The Road by BLUE ORANGE GAMES

Everyone’s favorite travel-size game has officially hit the open road. Each colorful symbol is something one would see on a typical road trip. This edition has a new way to play: One card is turned over, and all players scan the scenery for things that match the symbols from the card. Spot it to win.
— Karl Steinbach, owner of Rainbow Toys in Falmouth, Maine, told TDmonthly in an April 2013 survey that this version of Spot It! is a best-selling travel toy. 12/16/2011 (MSRP: $12.99; Age: 7 and Up)

Newspaper Dot-to-Dot Vol. 8 by MONKEYING AROUND 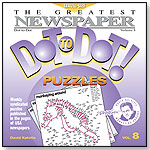 The Greatest Newspaper Dot-to-Dot Puzzles volume 8 is a new 5.5" by 5.5" pocket-sized collection of weekly dot-to-dots that have been published in various USA and international newspapers. Includes difficult dot-to-dot puzzles with no clues as to the final form. The images slowly emerge as the puzzler connects the dots. In addition to traditional connect-the-dots, it includes unique innovations such as connecting odd/even numbers and multiple line variations. 40 pages long with 36 puzzles. (

Magnetic Travel Tangoes® delivers all the fun of traditional Tangrams in a compact form. Includes seven magnetic puzzle pieces, an integrated play surface, two wire-bound puzzle booklets with 24 puzzles and a snap closure. Choose the puzzle you want to solve. Magnetic pieces stay in place on play surface. If you get stumped, just flip the page to see the solution. Great for short trips, long journeys or even staying at home. Available in three themes: Animals, People and Objects. 5/29/2007 (MSRP: $9.99; Age: 5 and Up) 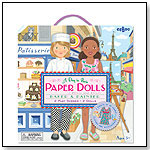 "A Day in Paris" is the latest in eeBoo's award-winning Paper Dolls' series. The set comes two 8 1/4" tall dolls - one is a baker, the other a painter - and a colorful 2-sided stand-up scene featuring a bake shop on one side and a Parisian street on the other. Two sheets of re-usable electro-static sticker clothes and accessories suit up the dolls to bake, paint, or stroll cobble-stoned city. Launch date: January 2012. 12/29/2011 (MSRP: $15.00; Age: 5 and Up)

Find It At the Beach by FIND IT GAMES

Ever lose something on a sandy beach? Find it at the Beach was released in the summer of 2006 featuring dozens of different sea creatures as well as different items you might find on a beach. With attractive blue ends and the same outstanding quality, Find it At the Beach will be a must have addition to your Find it collection. Now you can enjoy the beach all year round! 9/22/2006 (MSRP: $20.00; Age: 8 and Up)