Long days snowed-in at home are the perfect time to take out one of the fun educational toys below. Whether kids are working with circuits or running their hands through sensory sand, these best-selling toys will keep them from getting cabin fever until the warm weather sets back in.

Chemistry Plus: The Alphabet of the Universe by SCIENCE WIZ / NORMAN & GLOBUS INC.

40 page science book with materials. An exciting set of selected experiments (Split water into rocket fuel! Pop hydrogen! Flame test salts! Grow huge crystals! Model 3D electron orbitals!) designed to make elements elementary and explore the periodicity of the periodic table. Learn about atoms and the stuff they are made of - protons, neutrons and electrons. This beautifully illustrated book takes children through the alphabet of the universe.
— In a November 2014 survey, two retailers told TDmonthly that Science Wiz kits are one of their store's best-selling educational toys. 4/4/2014 (MSRP: $19.95; Age: 8 and Up)

This play sand is made up of regular sand and a special non-toxic compound that makes it sticky - but only to itself. This means that kids can use it just like wet sand, while grownups don't have to worry about it making a big mess. The sand is also waterproof, so kids can make water features in their sand castle without having to worry about the castle washing away.
— In a August 2014 survey, two out of 10 retailers told TDmonthly that Kinetic Sand was their best-selling toy.
— In a November 2014 survey, two retailers told TDmonthly that Kinetic Sand is one of their store's best-selling educational toys. 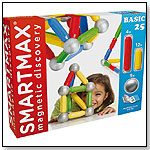 SmartMax Set - BASIC 25 allows children ages three and up to experience the wonders of magnetism and the fascinating world of construction in a safe way. Towers, bridges, and houses are just a few building options that take advantage of the large pieces to engage even the youngest builder.
— Diane Gervais from Amato's Toy & Hobby in Middletown, Conn., told TDmonthly in a November 2014 survey that Smartmax sets are one of their store's best-selling educational toys. "Smartmax is pretty popular right now in preschool," she told us.

Grow dozens of dazzling crystals and conduct 15 illuminating experiments with this classic science kit. Experiment with four chemically different crystals each with different properties, including potassium alum crystals that form regular octahedrons, rapidly growing sodium sulfate crystals, long needle-shaped sodium acetate crystals, and plaster which is made from gypsum crystals. Mold fun plaster shapes and mix the dyes to grow a rainbow of custom colored crystals. Measure how the crystallization of solids out of a solution, and the dissolution of crystals back into solution, affect the temperature of the solution. Learn about the energy of crystallization. Investigate solutions, crystallization, and the chemistry of crystal growing. Learn about the structures and geometries of different crystal shapes. This kit is thoroughly tested and safe: Over one million units of this kit have sold worldwide. A full-color, 32-page experiment manual guides your experiments in crystal chemistry and Earth science. Launch date: Summer 2012.
— Mary Porter Green, owner of Curiosity Zone in Ashburn, Va., told TDmonthly in a Fall 2012 survey that kits from Thames & Kosmos are one of their top-2 bestselling educational products. They sell dozens each month.
— Mary Porter Green, owner of Curiosity Zone in Ashburn, Va., told TDmonthly in a March 2014 survey that crystal growing kits were a best-selling products. 1/20/2012 (Age: 12 and Up)

Build Your Own 40X Microscope with light by ARTEC EDUCATIONAL 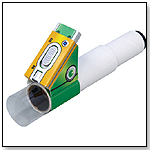 40x magnification! The bright LED makes observation easy! You can even examine solid objects!
— Paula Bolte, owner of Imaginations Toy & Furniture Co. in Blacksburg, Va., told TDmonthly in a November 2014 survey that Artec science kits are one of their store's best-selling educational toys. 9/20/2013 (MSRP: $9.99; Age: 8 and Up)

Centered on basic math skills and beginning reading, this workbook includes activities with color illustrations that allow kids to practice for reaching first-grade goals while strengthening their critical thinking.
— Seven of 40 specialty retailers referenced books or study guides of some sort when asked about best-selling educational toys and school supplies in fall 2009.
— Annie’s Toy Chest in Cocoa, Fla., sells about 18 School Zone books per month. “Tourists grab them and use to keep the kids thinking on breaks,” Owner Teresa Derry told TDmonthly in late 2009. 11/24/2009 (MSRP: $5.99; Age: 5 to 7)