THIS BANNER IS AN AD:
TOYDIRECTORY > CORINTHIAN GAMES LTD. 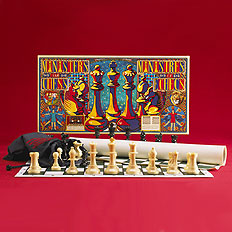 The game Ministers™ Chess simply adds the hitherto absent symmetry to chess. Now the King is flanked by two queens called 'ministers', the historic name of what we nowadays called 'queen' in the game of chess (see Encyclopaedia Britanica under CHESS).

In the process it enlarges the battle field from 64 to 9x9=81 squares. The result is a more powerful game, with powerful armies, wherein each king is protected by a minister on each side; instead of the king's bishop-side weakness of conventional chess.

The Third Edition includes two gifts: an additional roll-up board and a cloth chess bag. The game has a highly educational value. It creates new interest in chess, and teaches the young that even today, 2000 years later, one should question old teachings and may, through a simple modification, come up with a spectacular result that would change the world


You can also find CORINTHIAN GAMES LTD. listed in the following categories on ToyDirectory.com:


If you would like to request wholesale pricing, please include the following information with your request: