THIS BANNER IS AN AD:
TOYDIRECTORY > PUTUMAYO KIDS 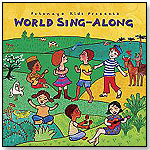 Putumayo World Music was established in 1993 to introduce people to the music of the world's cultures. The label grew out of the Putumayo clothing company, founded by Dan Storper in 1975 and sold in 1997.

Putumayo Kids, a division of Putumayo World Music has become one of the leading companies providing children's retailers with fun and educational CDs to play and sell in their stores. The melodic music appeals to children and parents and our colorful artwork will add a unique flavor to your merchandise presentation.

Since the release of our top-selling World Playground album in 1999, Putumayo Kids has expanded greatly and now offers 9 CDs and 2 Multicultural Activity Kits for children, teachers, and families. The entire series has won critical acclaim and top awards, from Parents' Choice Awards to the National Parenting Publications Association Awards and continues to be featured in multiple print, web and media outlets.

A portion of the proceeds from each new Putumayo Kids release benefits a non-profit group that support communities in the regions or countries where the music originate.

Mention ToyDirectory.com to learn more about our 60-Day Risk-Free Trial


You can also find PUTUMAYO KIDS listed in the following categories on ToyDirectory.com:


If you would like to request wholesale pricing, please include the following information with your request: