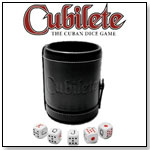 Mentirosa© is a version of liar's dice that is played with Spanish Poker dice and the exclusive Mentirosa Player Tubes available only in this timeless game set.

The object of the game is to guess what your opponents have rolled without going over.

Unlike traditional poker games that require a poker face and mostly silence, Mentirosa encourages you to trash talk, taunt and tease your opponents. It's the main strategy, hence the name of the game: Mentirosa (Spanish: liar).

* 6 Mentirosa Player's Tubes
* 6 sets of casino-grade poker dice
* Loser Chips: These chips will help you keep track of the winners and losers.
* Mentirosa Professional or Travel storage case
* Instructions in English and Spanish.


To begin the game, each player rolls a single die in open view of other players. The player with the highest suit starts the play. If a tie occurs, only those players in the tie roll again.

Players throw five poker dice into their tube. They look in their tube to see what they rolled.

A turn begins when the starting a player makes a call, for example three Jacks. This means they believe that there are at least three Jacks among all the dice in play.

The next player has two options:

The loser begins the next turn. There is no passing. Once a call is raised, it is the next player’s turn and he or she has the same two options.The game continues in this manner, player after player, until a call is challenged.

Once a player receives 5 loser chips, they are out of the game. Last man standing wins!


You can also find YUCA PRODUCTIONS listed in the following categories on ToyDirectory.com:


©1996-2022 TOYDIRECTORY.com®, Inc. All rights reserved.
Use of this online service is subject to the Disclaimer and the Terms of Use.