THIS BANNER IS AN AD:
TOYDIRECTORY > GAZIMA GAMES INC 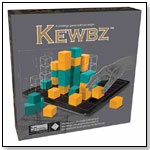 Kewbz
Product added on: 11/19/2010
See all of GAZIMA GAMES INC's products in our database
Shop For Products

GaZima Games, The Next Generation of Interactive Family Games

Founded by former United States Marine Corps helicopter pilot Greg Zima in March 2007, GaZima Games creates fun and interactive games that the entire family can enjoy.  From the fast and furious pace of the award-wining Ratuki™, the fast flippin', quick grabbin' card game, and ZIP!™, the Fastest Dice Game in the Universe, to the challenging, multiple award-winning memory game Gobsmacked, we have something for everyone.

With two new games released in 2010 — Stomple™ and Kewbz™ — GaZima Games continues to bring to life innovative and unique games. And remember, "Though it's always fun to win, it's time spent with family and friends that you will remember most."

You can also find GAZIMA GAMES INC listed in the following categories:

If you would like to request wholesale pricing, please include the following information with your request: AD