THIS BANNER IS AN AD:
TOYDIRECTORY > IMPERIAL TOY LLC 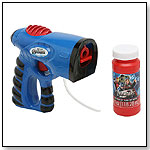 Bubble Blaster: The Avengers
Product added on: 8/20/2012
See all of IMPERIAL TOY LLC's products in our database
Shop For Products

Founded in 1969 and headquartered in North Hills, CA, Imperial Toy LLC is a leading private toy manufacturer. Imperial leads the industry in domestic toy units shipped and is the worldwide number one producer of bubble toys and related products. Imperial Toy is a creator and marketer of such brands as Miracle® Bubbles, Super Miracle® Bubbles, Buddy L® and Runway Pink™. Imperial also holds the licensing rights to popular licenses such as Little Tikes, Dora the Explorer™, Go, Diego, Go! (tm), The Backyardigans®, Spongebob Squarepants™, Thomas the Tank Engine ™, Bob the Builder®, Batman®, Ford, Jeep, GM, Dodge, and Universal Monsters®. The company has manufacturing and distribution facilities in Memphis, San Diego, Tijuana and Hong Kong. Imperial Toy has won numerous awards, including the induction of Miracle® Bubbles into Parenting magazine’s "Toy Hall of Fame."


You can also find IMPERIAL TOY LLC listed in the following categories:


If you would like to request wholesale pricing, please include the following information with your request: AD