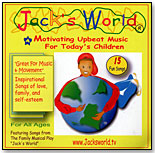 Inet Productions is the company behind Jack's World, a children's musical that presents the story of Jack, an elementary school student who runs away from home to escape the pressures he feels from his parents and siblings. Jack's running away not only has a crippling effect on his immediate and extended family, but also on his peers and schoolmates, all of whom come to realize Jack is crying out for help. Jack's family, school, and community embark on a city-wide search and Jack is soon reunited with his family. The adults in Jack's life concentrate on letting him know how special and important he is to their world. Jack shares his story with his classmates as a way of encouraging them to have positive self-esteem and to build strong relationships with their families.

Jack's World is an important children's musical that deals with offering solutions to problems and promises that confront both children and adults.

Jack's World is the Hip Hop version of the new cultural diversity. Esteem building tools are introduced to teach children rhythmic lessons of growing up. In this world, they discover how to teach each other. The musical involves live children singing, acting, dancing, and story telling.


You can also find Inet Productions, Inc. listed in the following categories on ToyDirectory.com:


©1996-2022 TOYDIRECTORY.com®, Inc. All rights reserved.
Use of this online service is subject to the Disclaimer and the Terms of Use.