Before bringing a new toy or game to market, legal protection in the form of a copyright, patent and/or trademark is essential, whether you start your own toy company or sell your product to an established manufacturer. TDmonthly Magazine spoke with three intellectual-property law attorneys who helped break down the differences between copyright, patent and trademark procedures.

Eric Prager, principal for Darby & Darby, said that registering a copyright is a relatively simple process with a $45 filing fee. A two-page application can be obtained at the U.S. Copyright Office. For toys and games, copyright protection can be valuable to guard visual depictions of game boards and action characters and expressions in words, such as promotional copy.

Obtaining a patent, however, is more expensive and complicated. It can take three to four years and must be done on a country-by-country basis. Since the invention must be new and not obvious, the attorney's job is both to advise the client whether it will be possible to obtain a patent and then to argue the case for the inventor if the patent office states that the idea is not patentable VIEW ARTICLE.

"At the highest level of abstraction, it may be that there are very few games that haven't been done in some way before, but as you start slicing it down to more specific implementations it may be that you come up with something that is novel," Prager explained.

Due to the expense and time involved, it is important to consider how broad a patent you are likely to be able to get.

"At the time you invent and the time you file your application, you don't know whether a product is going to be a commercial success," noted Prager.

This doubt could lead to loss of thousands of dollars in legal fees on a bad idea. However, failure to apply within one year of the first public disclosure in the United States will put a potentially valuable creation in the public domain. In most developed countries, this one-year grace period doesn't exist, which means an attorney must immediately file an application, often an international placeholder under the Patent Cooperation Treaty, for the inventor.

"The need to file before success is assured is a difficult reality of patent law," Prager commented.

A trademark is a word, symbol, sound or even color that indicates a single source of origin.

"Trademarks tell purchasers from whom they are buying," he continued. "Trademarks are almost always used at the consumer point but may also be used at the wholesale level. Trademark rights in the United States arise by using a mark in commerce, not by filing a registration. Outside the U.S., the rule is usually the opposite."

Douglas Miro, partner with Ostrolenk, Faber, Gerb & Soffen, pointed out that accusations of infringement are common,

making it risky for an inventor to sell a product without checking out new developments. He pointed out that toy manufacturers constantly sue each other. VIEW ARTICLE.

"Since a lot of toys are only seasonal — sometimes they're hot for just one year — it's tough to keep chasing after people that knock off your products," Miro stated. "In some companies the trademark can be their most important asset."

Even with legal protections Linda A. Kuczma, shareholder with Wallenstein & Wagner, advised caution when licensing to a manufacturer.

"You want to be careful when you go into the negotiations because you still don't want them to steal your basic idea. … Ideas in and of themselves are not protectable in the law," Kuczma said. "It's how you express those ideas."

The potential financial benefits of working with a large company might also be outweighed by other concerns. 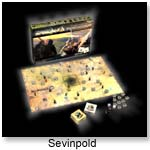 "Going through a big manufacturer doesn't guarantee success," advised Alex Zelikovsky, a co-founder of Sevinpold Castles Inc (ToyShow). "You most likely have to give up most of your creative control, which we felt was important to maintain. You also have to give up a very substantial portion of your margins."

Whether you decide to work with a major company or start your own, protecting your idea requires savvy, integrity and all the defenses the law offers.

(The final installment of this 3-part series will be available in the September issue of TDmonthly Magazine.)