Due to heavy traffic, this TDmonthly front page has been streamlined for faster loading!

Make DIY Genius Labyrinth Marble Board Game Maze from Cardboard In this video I show how to make an amazing cardboard marble game, that you can easily build at home. This puzzle labyrinth game is round and fits perfectly into your hands. The goal is to roll the marbles from Start to Finish. It's easier said than done! Don't get lost in the cardboard maze and watch out for those dark holes. It's a perfect do it yourself project. You can also build different variations and levels of difficulty. So take some marble balls and play. It's a crazy cool game.

By: Justina Huddleston
8/1/2015
With additional reporting by Chris Lundy and Brenda Ruggiero

Puzzles are a developmental powerhouse, teaching kids about shapes, patterns, and developing spacial reasoning and fine motor skills. According to specialty retailers interviewed by TDmonthly, these are the best-selling puzzles in specialty.

Where to Put It? by RAVENSBURGER 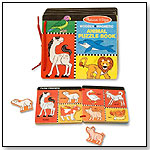 Help each magnetic animal find its place and environment. This magnetic book with removable pieces is "bound" to amuse and educate with pet, farm, wild and undersea animal shaped magnetic pieces.
— As of 1/17/2013 this product had 4.8 out of 5 stars from 21 reviews on Amazon.com. Pros: Good for travel; Easy enough for young children but challenging enough to hold their interest. Cons: Pictures begin to fade after a while.
— In a November 2013 survey, Joe Berardoni, owner of Pun's Toys in Bryn Mawr, Pa., told TDmonthly that puzzles, especially from Melissa & Doug, are a best-selling education toy.
ToyDirectory Product ID#: 36023      (added 1/18/2013)
.
AD
Vehicles Sound Puzzle by MELISSA & DOUG

Featuring detailed images of 8 favorite noisy vehicles, this wooden peg puzzle makes the vehicle sound when a piece is placed correctly in the puzzle board. Eight sounds in all. Full-color, matching picture under each piece. Dimensions: 1.2" x 8.5" x 11.7" Assembled. AAA batteries not included.
— Michael O'Dell of Toys from the Attic in Rehoboth Beach, Del., told TDmonthly in a Summer 2011 survey that he sells 10 Melissa & Doug sound puzzles each month.
— As of 7/12/2011 this product had 3 out of 5 stars from 23 reviews on Amazon.com. Pros: Affordable; engaging. Cons: Many reviewers said the sounds were poor quality.
— In a February 2012 survey about wooden toys, three out of 14 retailers said that puzzles from Melissa & Doug were their best sellers in the category. “Melissa and Doug has been a core of the store for years and years," Mike Snyder, owner and manager of Cville's Hobbies, Games and Toys in Charlottesville, Va., told TDmonthly.
ToyDirectory Product ID#: 32555      (added 7/12/2011)
.
AD
Rubik's Cube 25th Anniversary Edition by WINNING MOVES GAMES

Other products from WINNING MOVES GAMES

1980, the year Olympic skater Michelle Kwan and pop-singer Christina Aguilera were born, President Ronald Reagan was in the White House and millions of Americans were tuning into the TV show Dallas, was also ?the year of the Cube!? Now a pop-culture icon, the first Rubik?s Cube made its debut at the American International Toy Fair in New York in 1980, and within just two years, 100 million ?Cubes? were in households from Peoria, Ill. to Paris. The cube has 43,252,003,274,489,856,000 combinations and can be solved by true aficionados in as few as 16 seconds. It?s a great time to pick up the Cube again. The 25th Anniversary Edition Rubik?s Cube comes in a collectable silver packaging and with a free Rubik?s Cube stand.
ToyDirectory Product ID#: 2095      (added 12/27/2004)
.
AD
Dinosaur Travel Pouch Puzzle by CROCODILE CREEK

Other products from CROCODILE CREEK

Our unique package design has made these puzzles instant best-sellers. Great themes and illustrations. Unique compelling design. Eye-catching, reusable package. Each 100-pc puzzle is 8" x 12". Pouch is 5.5"W x 7.25"H x 2" D. For ages 5 & up. Crocodile creek products conform to all of the appropriate safety standards.
— Dean Smith, owner of Jazams in Princeton, N.J., told TDmonthly in a Summer 2012 survey that they sell 10 of this item each month.
— In a July 2013 survey, two out of 12 retailers told TDmonthly that Ravensburger was their best-selling puzzle brand.
ToyDirectory Product ID#: 34575      (added 7/6/2012)
.
AD
IQ Twist by SMART TOYS AND GAMES INC

Other products from SMART TOYS AND GAMES INC 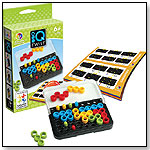 Players give their brains a spin in the right direction and put all the twisted puzzle pieces on the game board. It looks easy until they realize that there are pegs that are in the way. And players can only put a playing piece over a peg if both are the same color. 100 challenges ranging from easy to extremely difficult. It's compact, so it's an ideal brain snack while on the go.
—  Paula Bolte, owner of Imaginations Toy & Furniture Co. in Blacksburg, Va., told TDmonthly in a February 2012 survey about best selling games that "Over Christmas time, IQTwist did well. Getting a big display of it and playing with it in the store helped."
ToyDirectory Product ID#: 33607      (added 2/8/2012)
.
AD
Janod Magnetic World Puzzle by JURATOYS US CORP

Other products from JURATOYS US CORP

A fun and educational way of discovering the planet. Each magnet represents a country or region of the world, with its name, capital and an illustration characteristic of that part of the world. The big magnetic board shows the world with its continents and oceans: the colour used for each region helps you find its place. Have fun putting each country in its place and you will have a wonderful map of the world which you can hang on the wall. Wood : Plywood (tray + magnets). Printing : sticked paper.Delivered shrinkwrapped. Cardboard wedge provided in the master carton to protect the world maps during delivery.
ToyDirectory Product ID#: 37371      (added 8/3/2015)
.
AD
Disney Frozen Puzzle 3x49pc by RAVENSBURGER

Three really bright and colourful Disney Frozen jigsaw puzzles for fans everywhere to enjoy! Each of the puzzles features key characters from the popular Disney Movie. Each puzzle is cut to 49 pieces. The puzzles are marked on the reverse with a different pattern, so that puzzle pieces can be readily sorted before being assembled Puzzles are an excellent way to encourage your child’s observation, imagination and communication skills. Ask questions about the picture or get your child to talk about the picture – for example ask them to name the characters, what they think is happening, and even what some of the characters are saying. Ravensburger Puzzles are easily identified by the "blue triangle" logo.
ToyDirectory Product ID#: 37372      (added 8/3/2015)
.
AD
3-D Children's Globe Puzzle by RAVENSBURGER 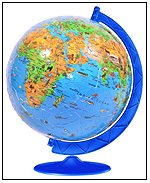 This puzzle features dramatic dinosaurs in an exciting prehistoric scene. 2' x 3' when complete, it features 24 extra-thick pieces with an Easy-Clean surface to keep them looking like new.
ToyDirectory Product ID#: 37374      (added 8/3/2015)
.
AD Look up Manufacturers at ToyDirectory.com®
Disclaimer  Privacy Policy  Career Opportunities  Feedback
Use of this site constitutes acceptance of our Terms of Use.
Copyright © 2020 TDmonthly®, a division of TOYDIRECTORY.com®, Inc.